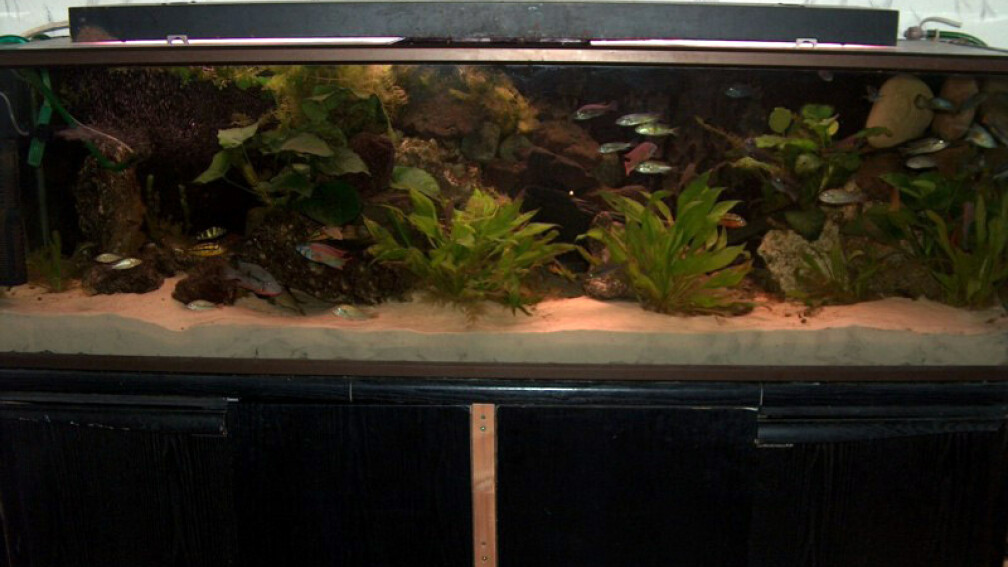 Jewel, custom-made
Cabinet, itself built by the previous owner

Astatoreochromis alluaudi comes in Lake Victoria itself and surrounding lakes and rivers. One of the few non-endemic cichlids in Lake Victoria. Also belongs not to Victoriaseecichlidenartenschar nor intersects with this. Unfortunately, introduced in the 80s, animals are no longer available in Germany, therefore, had to pick up my four in Paris.

A. latifasciata peaceful cichlids that were once widespread in Lake Kyoga and Nawampasa times, now has only left one remaining population in Lake Nawampasa. These fish are critically endangered in nature
Haplochromis thereuterion is one of the new available Victoriaseecichliden. The animals originate from captive breeding at the University of Leiden. Not too aggressive insectivores, hold off on the swarm

Harpagochromis sp. "Orange Rock Hunter" fish-eaters, max. 25-30cm, critically endangered species in the Harpagochromis howesi species complex in nature survived until now only on Gabalema Iceland. The only Victoriaseeart was detected in the paternal mouth brood care in nature (Seehausen 1996). In the aquarium shy and peaceful.

Paralabidochromis sp. "Rock Kribensis" CH22, one of Mbipi (the same as Mbuna in Lake Malawi), one of the few species that are not to be jeopardized seem

Prognathochromis sp. "Silver Stilleto" another fighter from the Nawampasa / Lake Kyoga. Swarm attitude is an absolute must! Peaceful, usually holds on in middle water layers.