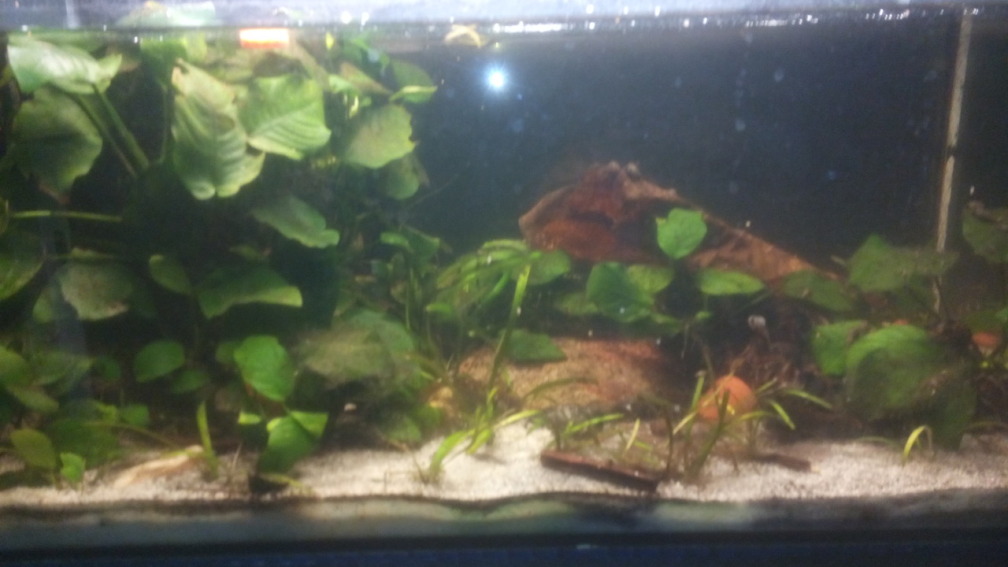 Description of the aquarium:
Category:
Mixed East Africa tanks
Tank size:
60x30x30 = 45 liters ~ 11 gallons (us)
Specific features:
Although the basin holds 54l, it is however not completely filled to the brim. Visually this is certainly not very appealing. But I still decided to because burn my plants that rise up out of the water otherwise. Also, I was able to observe that the dwarf frogs almost daily sun with lowered water level at the water surface and to some even crawl on the outstanding plants.

Aquarium decoration:
Gravel:
As substrate I beige sand. The filling level is approximately 4cm.
Plants:
The basin is planted with a large, 10-year-old Anubias and some of its offshoots. In addition, I found a few Moss balls, something Javafarn and a small "grassy something" in the aquarium.

Aquarium equipment:
Lighting:
The pool is illuminated with a "Solar Tropic" (JBL, 15W) from 12.00 to 24.00 clock.
Filtration:
In August 2005, I changed my dwarf clawed frog-pool on a filterless operation.
I did that, that the frogs were apparently disturbed by the flow of the filter and are also happy to crawl into the gap behind it, I was afraid they might get stuck.
The pelvis is stable and easily.

A water change of 50 percent with the same values ​​of water is carried out every week.
Other equipment:
Heating is provided by a heating element of 25W.

NOTE: The images here are related to the text under "others" !!

(Note: Water may be soft as long as there is no problem with moulting, it's probably okay but I'm thinking the water with peat prepare...)
Feeding:
The African dwarf frogs get every other day a half, previously thawed frozen food cubes. This diverse varieties are fed, zBsp. white and black mosquito larvae, Artemia, Daphnia. Bloodworms I no longer'll feed because I (and apparently others) thus had a bad experience.
Live food is also fed depending on the range, then replace the frozen food.
Korvimin (the vet) is beige feeding 1x a week.

Since 2005 I have uä a dwarf clawed frog-species tank with a capacity of 54L, it is furnished with a sand bottom, a root and plants such as Anubias, Java fern and is operated without filters. This basin is home usually around the 5 African dwarf frogs, 2-3 racing snails and a lot of tower snails. Fed the frogs three times a week with various live and frozen foods, once a week the food with Korvimin ZVT is plus enriched reptile, the snails get from time to time even vegetable (carrots zBsp). So far I had no notable problems with this pool. Last fall my remaining Altbesatz has verabchiedet the afterlife, which is why I have taken the end of January, five new young African dwarf frogs with me. I have placed them directly into the entertainment pool, since as mentioned no froschiger Altbesatz longer existed and I did not really expect to einzuschleppen me something. Unfortunately I was wrong.
Just two weeks after the onset of my frogs began to swell, both on the abdomen as well as the mouth and the back legs. I spoke with a amphibious Fachtierarzt and we chose the frog in the entertainment pool kept to because the other frogs were exposed at this point ready the same pathogens and e gave the impression that their immune systems deal came with it. My balloon frog was once caught daily from the basin and for 1 hour, bathed in 500ml water in which 1/2 teaspoon magnesium sulfate was dissolved. Furthermore vermeht Korvimin was fed, every two days over the food. There were also improvements soon and einglagerte liquid began to degrade, after two weeks, the frog was "normal" again. We still have a few days further bathed him in the above solution to make sure, but he seemed to have survived it.

However, the end of March was another dwarf clawed frog symptoms of an illness, he was red-colored arms, bleeding. This symptom is known as "Red Leg", it is not the actual disease, but a consequence of a disease. This can have very different causes, from a bacterial infection through viruses that up to mushrooms. We took this frog for veterinary specialist, there we were told that a thorough investigation of the cause can only occur via a specialized laboratory (zBsp Exomed) and unfortunately is very expensive. Unfortunately, we had already decided in the last weeks vet bills in the thousands of our birds, therefore we have a heavy heart against this laboratory Untersuchunge - the vet gave us to get the frog "on spec" to be treated with Baytril, in the hope that are the red legs result of bacterial infection. The frog was separated on and kept in a sterile environment, the water was renewed up salt (4g salt water to 10l) and every four to six hours. For five days, the frog was set every day for four hours in a Baytril bath, it came 0.5ml of 2.5% Injektionslöung on 1 liter of water. There were fast improvements, the bleeding started to degrade. After five days of treatment, the frog remained still to fully recover in the sterile attitude.

Unfortunately, now appeared in another frog in the entertainment pool similar hemorrhaging in the limbs. In Abspache with the vet also this was separated on and treated like the above, which also led to success.
After a quarantine period both frogs mid-April were put together in a Quarantänebox, at this time the bleeding in both animals had completely disappeared. The water continued to be salted. I had then really slowly get used before they return to the conditions in the entertainment pool, so I can put it back.
But unfortunately I had been looking forward too early, because early April showed another frog in the entertainment pool signs of bleeding, as well as the balloon frog started (see above) inflate again. The vet advised at this point to treat all remaining frogs with Baytril and completely eliminate the pool and to disinfect reinfection of already [...]