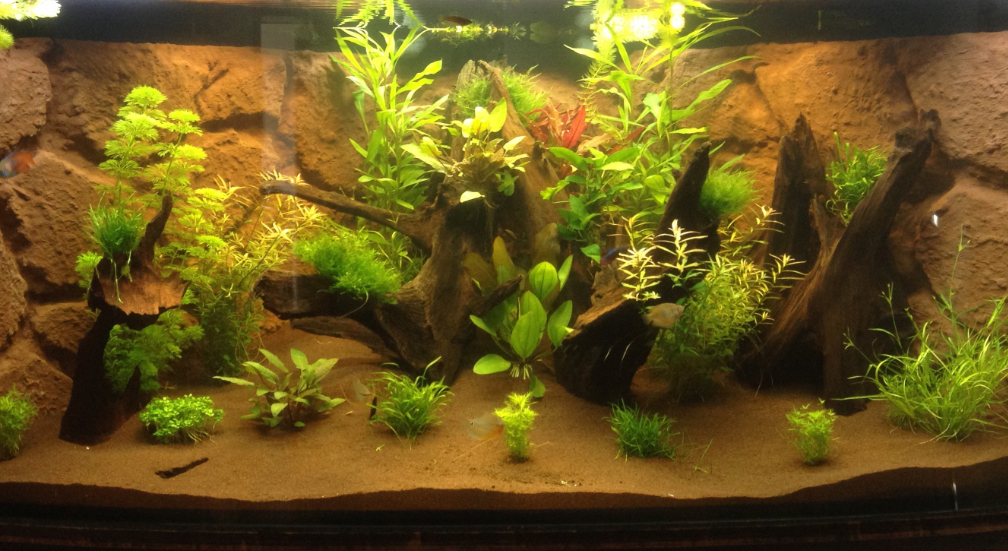 Description of the aquarium:
Category:
Community tanks
Tank size:
107x107x60 = 410 liters ~ 108 gallons (us)
Specific features:
open delta basin with downcomer. The aquarium is hung on the wall. The technique is completely one floor down in the basement.

Special features of the facility:
multiple roots
Here are a few rocks and caves

The back panel is a self-made from styrofoam, tile adhesives and colored grout.
Unfortunately, the Aquarium is a total of something very turned brown. I would have preferred to use black sand. However wide the plants will be so likely to see in the foreground very in width from in the foreseeable future no longer much of ground.

Aquarium equipment:
Lighting:
Illumination is provided via 4 LED strips which are glued in three aluminum profiles.
from front to back
1x 120cm Day in the first profile
1x 80cm Sunset + 100cm RGB in the second profile
1x 50cm Day in the third profile
The lights are controlled by a daylight simulator.
9: 30-10: 00 clock until sunrise to 96%
21: 00-21: 30 clock sunset
21: 00-2: 00 clock Moonlight
Performance during the day exactly 50W (measured)
Filtration:
The filtering is done via an onboard in the basement filter tank. This is a normal pool with dimensions of 60x30x35cm. This 4 disks were glued and introduced a lateral hole for the overflow.
The overflow shaft of the aquarium is designed as a trickle. About a fill-the water drips through the filling of helix 14 and then runs into the first chamber of the filter tank. Which is also equipped with Helix. This is kept neatly in motion. The chambers 2 and three are equipped with coarse filter mats. In the 4th chamber is a Netzt with zeolite. The last chamber absorbs the heat exchanger and the feed pump. It involves a Aquabee 2000/1, which has a relatively high head, which was a good choice at this height difference. In addition, still in this chamber two temperature sensors and currently still provisionally a vent for the CO2. However, this requires further optimization.
Other equipment:
The aquarium is brought to temperature for the heating of the house. Since the sump is in the boiler room, this variant has formally imposed. For the sump an extra heating pump was installed as the pump of home heating is not always in operation. In sump a small heat exchanger is made of stainless steel housed which is supplied as required by heating thermostat with heating water. The external sensor the thermostat is lowered into the clear water chamber. For safety reasons the heating pump was still an electric thermostat upstream to prevent in case of failure of the heating thermostat overheating of the basin. Bedes works beautifully.

To avoid unnecessary heat losses from the sump in the winter, it is nicely packed in styrofoam. As I shut the whole on the front was not quite clear at the start of construction. During a visit to the hardware store I happen walked past a homeless Fester that probably had to get out and therefore was very inexpensive. That was the ideal solution for the key outstanding issue. Unfortunately, it's a little too big, which is why the building is not necessarily win a beauty contest. However, this is a very practical solution. I have to open everything in sight without it.
The water change is permanent dropwise in the clear water chamber. The dirty water flows over the weir into a rain barrel that transported the water using submersible pump regularly. There daily flow 30l fresh water into the aquarium. This corresponds to a weekly water change of 50%.
Effective exchange will probably be not quite at 50% because of the lack of cover a lot of water evaporates. That was Allerding so willed, because in space there was an extremely low humidity. Now with an aquarium, it is perfect.

Stocking:
The stocking is still rather sparse, since the pool is newly decorated.
Current residents are:

Nitrate: 0 mg / l
Nitrite: 0 mg / l
GH: 4 ° d
KH: 3 ° d
pH: 6.6
CO2: 20 mg / l
Temp .: 24 ° C
Feeding:
Flake food (Tetra Rubin)
Catfish chips (Sera)
white mosquito larvae (frozen food)
Daphnia (frozen food and living)
Further information:
On special request there is a brief explanation for the attachment of the basin on the wall.
Unfortunately I can not show a lot of photos, because at the time was not yet in sight, that I end up here with you.

Because the commercially available base units usually do not match the rest of home furnishings, usually are very expensive and also often are visually not really a hit, I had to think about something else. Because the technique should disappear in the basement anyway, I needed not necessarily a cabinet. With brick substructures I did not want to start. The entire apartment is newly remodeled, because I wanted to never again tear new holes. In addition, the often looks quite bulky.
Somewhere I had ever seen a hanging aquarium and was immediately struck hard. If the part so floats in space makes it an incredibly delicate impression. One does not feel the pool would occupy half the space. Thus, it was clear that part comes at your wall.
The strength of the wall is not a problem. There are both external walls made of solid bricks. The base should be as unobtrusive (thin) as possible. Any support from the middle of many well vorherein. The space under the basin should be completely free. If anything, consistently.
So I expect hard. The problem was to get to grips with not the strength but the stiffness (deflection). That's with thin straps of course not so simple.
The result was a structure made of rectangular steel sections with dimensions 60x40x8,5 mm. The front row with a length of 1600mm twice, just in the middle and all the corner. On the walls two continuous folded steel sheets with a thickness of 8 mm are dowelled with 6 heavy duty anchors, on which rest the carrier. The 6 dowels per side are something much, but as you sleep but much quieter. I had had so many holes provide a precaution, because you sometimes can take a fugue with such a wall. If you then have to drill through 8 mm sheet a new hole, one can quickly spoil the mood. The parts are not mutually screwed. It's all only. This clears all the weight of the pelvis. On the carrier then came a 22 mm screen printing plate. Which is largely waterproof and especially nice thin. This plate was the most expensive in the entire substructure. The total cost of the foundation amounted to € 57 exactly. But I have to say, the steel parts I got from an acquaintance for 10 € transport and catering costs get.
The construction went relatively quickly. Storage ponds and screen printing plate still came a safety pad. From Styrofoam I would advise in this case, since it can compensate for small occasional irregularities, but is seen on the surface rather inflexible. A possible deflection would be transmitted so directly on the bottom disc. Mosgummi, the wonderful balance.
The concerns about the sagging but were completely unfounded. After the initial charge has absolutely nothing flexed. The foam rubber has over the entire width of the same thickness.
I am sometimes crawled under the basin to make at least a couple of useful photos. The basic principle should be recognized.