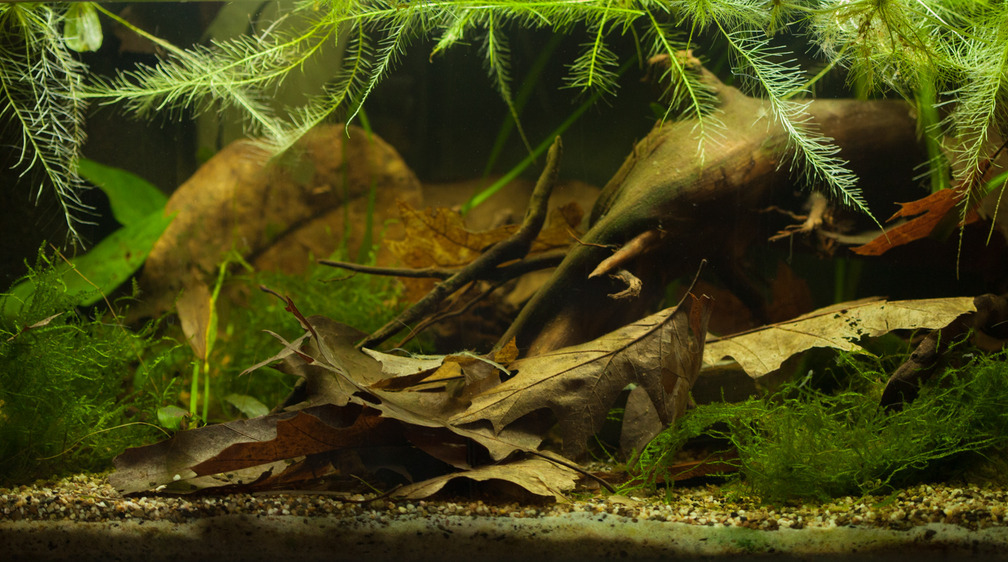 Description of the aquarium:
Category:
West / Central Africa
Tank size:
60x40x30 = 72 liters ~ 19 gallons (us)
Aquarium decoration:
Gravel:
Gravel / sand mixture
Plants:
Java moss
Cryptocoryne wendtii
Pistia stratiotes
Echinodorus
Special features of the facility:
Roots
Leaves
Aquarium equipment:
Lighting:
Diversa LED 14.4 Watt
Filtration:
HMF 250l / h
Stocking:
2.1 Hemistichodus lootensi
1.1 Hemistichodus mesmaekersi
Unlike African fin eaters (phago, Paraphago) shed eaters are much more pleasant companions. Although here the intraspecific aggression plays a certain role, but it can be quite keep up with other species combined. The species listed below have emerged after the method "Trial & Error" and be left by the two Hemistichodus species alone. Occasionally, the aquarium is used for rearing small juveniles, since these are also not respected, as long as their scales are not large enough for picking. Among themselves, however, it can go quite ugly, but it is not usually cause injury to the opponent. As food only living white mosquito larvae were previously thought, frozen and dry food is largely ignored.

5 Distichodus decemmaculatus
They are also available in small, Distichodus! Most are with D. sexfasciatus and lussoso large to very large members of this genus offered that to not only be quite aggressive, but also do everything to pieces what is green. D. decemmaculatus is much more peaceful, remains small and spared most aquatic plants (chickweed was yet eaten). The animals are best kept in small groups.


All species are native (black water -?) Tributaries of the Congo system. Noteworthy are the pH values ​​of 3.5 to the fishing places.