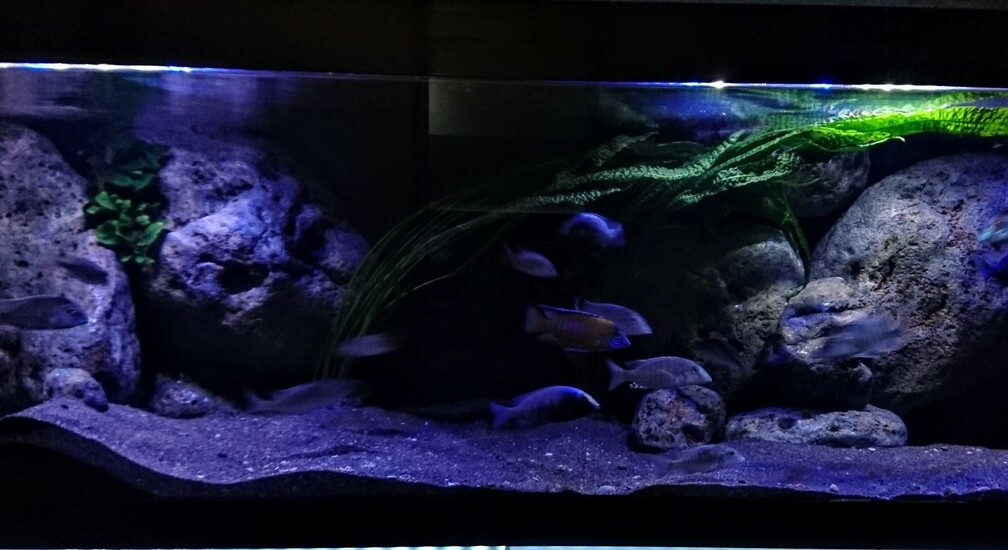 Aquarium decoration:
Gravel:
Proprietary Blend of 100 kg of sand in the grain size 0.4 mm to 0.8 mm.

The sand shrimp Gümmer is not covered with plastic but with food grade resin.

Despite that the there are hardly any plants in Malawi in the transition zone which I have chosen to use.
I find it visually appealing and easy, not least, the plants consume occurring substances and produce oxygen.
These plants were chosen because the water is quite low in nutrients by the nitrate-phosphate filter.

The Anubias are extremely tough and constantly drive despite the resin from new leaves.
The Crypts take their nutrients mainly via the roots, which is why they are fertilized with Sera Flore Nice fertilizer tablets.

Special features of the facility:
Here the transition zone of Lake Malawi was modeled.

Facility complete with Riverstones of Rockzolid.
Cut to size or cut in half and partly glued to the rear wall.

The stones were cut with the electric handsaw, experiments with the Flex have too much dusted.
Thus, the stones completely rest later plan on the rear wheel, the sections were marked with a Laserneviliergerät.

In addition, all the stones were according to the cut sealed with epoxy resin. After cutting so that the cut edges are also covered.
Was used Spezialepoxidharz the company Breddermann.

For better circulation within the stones, the holes were enlarged and more holes were drilled.
All in already existing wells, thus not visible.
The stones were glued to the rear window was strewn with black silicone which then with sand.
Thus, the bonding is barely visible.
Since the stones lie already complete plan and do not have a lift it was not necessary to bond with herself.
They are glued only at two accessible locations, sodas you can remove them if need be without any problems.

Were chosen because they all fit together very well and not as rugged as those modules River Stones.
Looks my opinion, more natural when the stones are round and have the same structure and color.

In addition, I wanted to leave in the middle of the rear window visible because that gives a nice deep effect.
And of course it takes away so not as much space as a continuous rear wall.
Only with a rear wall, it would be become more favorable.
Aquarium equipment:
Lighting:
An LED Alustrangprofilleiste of JMB with 12000K and 54 watts of power.
54 high power LEDs with 80 ° beam angle and a watts per LED.
Including controller to control Simulaton of sunrise and sunset and for dimming.

Runs currently dimmed to 60%, because otherwise too bright for my taste.

The plants grow very well under the light.

The super donut effect to produce the LEDs can not be seen in the pictures, unfortunately ...
Filtration:
Eheim 2180 professionel 3 1200 XLT, Thermo filter with integrated 500 Watt heating, electronic temperature measurement and display.
Equipped with 9 liters Siporax and a layer of foam in 30 ppi.
The foam is the first capacity, keeps the coarser dirt from Siporax away, prolonging the service life.
In order to achieve better biological filtering, the filter is throttled about 50%.
In addition, proceeds from this filter, a bypass to the UVC unit from.

Eheim 2075 proffesionel 3600, equipped with 4 liters Siporax and a layer of foam 30 PPI.
Again, the foam is the first layer.
This filter is also throttled by about 50% in order to achieve better biological filtering.
From this, a bypass filter is to filter column.

A flow pump is not needed because virtually no sludge remains lie.
Other equipment:
55 Watt UVC stainless steel filter, flow measured about 600 liters per hour.
Sterilization 100%

The additional filtering the water is very low bacterial count and incredibly clear.
The regeneration interval of the column is 6 weeks.
A water change is still every 14 days about 25%

Stocking:
The trimming also draws on the transition zone or sand zone.
In addition, here species were chosen receives in lake a kind of symbiosis.
The sand Sieber Teaniolethrinops and their followers, the Placidochromis.
In the lake the Taeniolethrinops dig in the sand and thereby produce large clouds as the Placidochromis wait in direct proximity to fressbares to peck out of the clouds.

The Lethrinops I have for some time, they were previously together with Copadichromis virginalis Firecrest and Aulonacara aquilonium in a basin.
There have however been shown to be very active and dominant.
I've had some Lethrinopsarten, but such was not yet dominant.
For this reason I try it now times with these somewhat stronger species.
Until now the also runs quite well, the dominant Lethrinopsmännchen has already occupied an area and also sells the larger Taeniolethrinops successfully.


The fish originate from Aqua-Treff, Cichlidenstadl and from MTZ Saxony.

Many thanks to Thomas from Aqua Treff for the numerous e-mails and phone calls.

Once a week, frozen food, white mosquito larvae and Artemia Golden Gate.
Further information:
The rear window and the left side plate were coated with Sprühfolie.
Two spraycoats in black / blue were applied.
Sprühfolie was chosen because they can be removed by simply pulling it off completely.
And because they are, as opposed to adhesive film, can completely bubble-free and opaque process even on edges.
Even water is never reach between glass and foil.