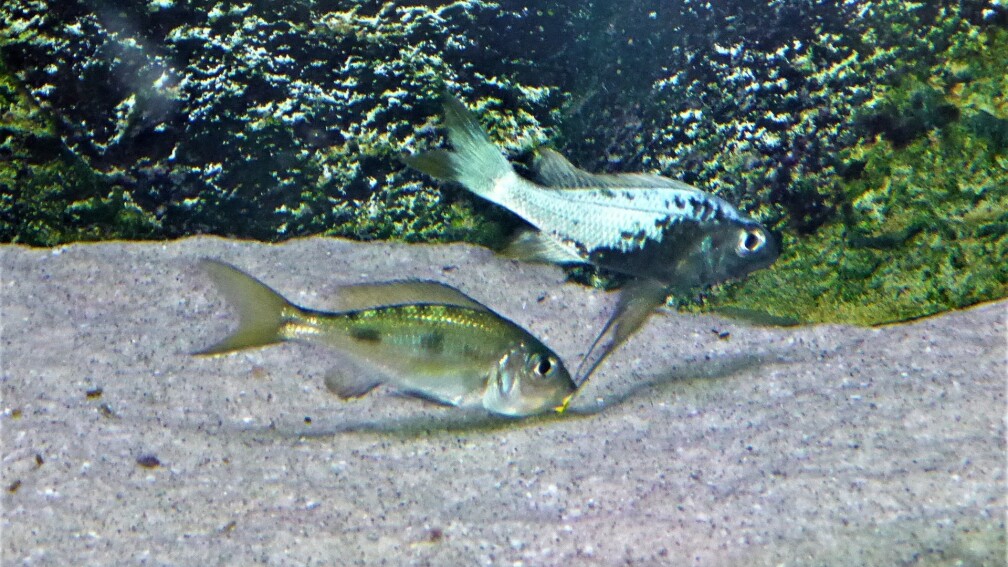 Description of the aquarium:
Category:
Lake Tanganyika
Tank size:
180x60x60 = 648 liters ~ 171 gallons (us)
Specific features:
Three holes in the base glass for filter connectors (behind the rear wall).

Plants are beautiful, but they had some complaints with smaller stones, as the multinationals would have otherwise been excavated)

In the rear area (under the stone constructions) a 2mm Plexiglas was glued as protection.

Aquarium equipment:
Lighting:
(2x 80Watt Arcadia T5 luminaires "Daylight" (without reflectors, one third of the neon tubes with aluminum foil were removed, since the light intensity was too high), lighting time 11.30-21.30Uhr (10 hours). Asymmetrically covered to insulate light intensity and get closer to the natural lighting conditions.)
Was briefly in operation. Change to the following LED module:

EHEIM powerLED Stripes - the new generation of aquarium lighting. Optimally matched to the individual lighting needs. For fresh- and saltwater. More efficient, more durable and more flexible than any other technique.

Bright sunlight (10,000 K) with optimized spectrum (blue 465 nm and red 625 nm), optimal for Lake Malawi and Lake Tanganyika aquariums.
Emphasizes blue and red components of fish and plants in a natural way
maximum energy efficiency (100 lm / W) and high brightness can be used as the sole light source due to the lumen maintenance.

The LEDs consume much less energy than efficient T5 fluorescent tubes. The service life is 150% higher. The attachment is much more flexible: Extendable bracket allow continuous adjustment to the aquarium width. And with corresponding adapter can replace any fluorescent tube.

A 43 Watt LED light bars ranging in my eyes completely for a Tanganjikabecken with a volume of 648 liters. More light is not necessary.

Overall, though a fairly expensive task, however. By the professional processing and long service life, an investment that is worthwhile in my eyes

Is intended to ensure clear water and the germ reduction.

Skim EHEIM 350, to clean the top layer of water temporarily in operation (if necessary).

When choosing fish I have made sure to use both animals the sandy zone and cave and rock dweller. I also wanted the Paracyprichromis have a freidlichen schooling fish in the basin. The worm perch I held for many years in a slightly smaller pool, which was dissolved. Since I very hange these animals and they lay a very natural and extraordinarily exciting social behavior on the day, they came (the stock was however greatly reduced and many animals given away) as the first in the basin. Certainly something unusual to hold a rather large pool one of the smallest cichlids of the lake.

Description:
The males of O.nasuta build a sand nest on a rock. Semi Adult males and females form large swarms in the water and eat plankton.
O.nasuta males are not as aggressive with each other such as. O.boops, yet the attitude of only one male with a group is due to the size of the animals advisable females. Several males should be kept together only in much larger tanks (> 700l).

Water change about once every 2 weeks one third

To socialize snails cichlids and Enantiopus, is certainly not typical and I was initially not sure if that would work. The much smaller Neolamprolgus are clearly the dominant animals and defend their wells and snail shells, but the Sandcichliden can now plenty of space. When Beck facility had to be paid to a strict limitation of the surface for the screw cemeteries. The association of these two types in my opinion is only possible with spacious pool and should be avoided in smaller tanks, as the not very strong enforcement Enantiopus otherwise be too stressed out.

Apart from a few snails cichlids are all still quite young animals, their size, shape, color and behavior are not yet mature. It will be exciting to continue to witness the development and follow it certainly update)