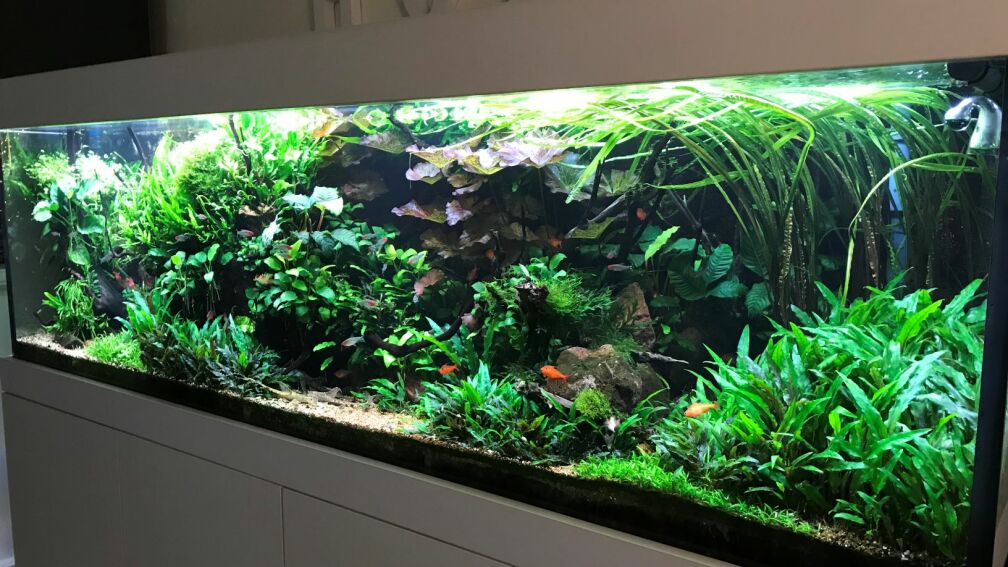 Description of the aquarium:
Category:
South America
Tank size:
200x50x60 = 600 liters ~ 158 gallons (us)
Specific features:
I try in this AQ Aquascaping with Bedüfnissen the fish to amalgamate. The harmony of the layout is just as important, such as storage facilities for the disks, as well Rüchzugsmöglichkeiten for shrimp and Co. The challenge was / is to dissolve the old AQ, to find a place to stay for the stocking and establish and retract the new AQ .... ,

Aquarium decoration:
Gravel:
In the background (planted area), I have the "old" inoculated soil (gravel with 2-5mmKörnung) from my predecessor AQ, with Manado mixed soil, introduced (from front to back ansteigend4-7 cm height), in the foreground (through a cardboard separated-see photo) I have introduced normal, bright quartz gravel 2-3mm grain. I tried to put the gravel in waveform with respect to the golden ratio. As a single fertilizer, I have a total of 1.5 Kg laterite introduced (Sandwich tactics).
Plants:
I have completely taken over the plants from my "old" aquarium and even a little added:
-Ambulia (Super nutrient Zehrer and indicator of poor iron levels)
-Various Cryptocorynes
-Riccia Bound to root
-Javamoos Tied to roots
-brasilianischer pennywort (flutend)
-Javafarn Bound to root
-Red Tigerlotus
-zerschnittende moss balls (around crevices to "greening")
-Staurogyne
-Pogostemon Helferi
-Riesenwasserfreund
All in all, I have decided for relatively simple and not so superlichthunrige plants, so I do not destroy the natural layout with too much light. I find it very nice if a AQ also has a few dark / mysterious corners.

Special features of the facility:
The rest of the equipment consists of marsh roots that I've stuck with aquarium silicone together. Petrified wood in connection with the jewel "rock" back wall rounds off the device.

Aquarium equipment:
Lighting:
The AQ is illuminated by an LED cluster and an ECO LED strip of daytime. The whole is controlled and dimmed by the scaping Light Controler of LiWeBe. I can only say the system works only super. The software is more or less self-explanatory, and the effects are sensational. I come from the classic T5 lighting (3x 86 Watt) without dimming. Over time, the fish got used to the sudden on and off of the light, but has pretty gedauert- and just new residents every shot downright through the AQ when the light went on. I now have only 160 watts on the AQ. The number of lumens is even slightly higher than in my old lights, but I drive the LED lighting never 100 percent, because:
1. The plants do not need the
2. The fish do not need sunglasses ;-)
3. The layout is much more natural
and 4. I'm saving money.
Overall, the AQ is illuminated 9 hours.
Filtration:
The AQ is filtered through a Eheim 2078 professionel 3e and a JBL 901 greenline external filter.
For visual clarification, I have introduced a JBL Aqua ball internal filter.
Other equipment:
Bodenfluter 100 W
Hunter rod heaters (both controlled by the Dennerle Duomaten)
Co2 system with JBL Reactor 2 bubble / 1 sec.
two TwinStar s (my rear wall still looks like on the first day

Water parameters:
Currently I have the following values:
I filter now over peat. The current water values ​​(01/30/15)
NO3: 10 mg / l
NO2: 0 mg / l
GH: 9
KH: 4
PH: 6.8
I drive the aquarium at 28.0 degrees.
Fertilization is now after easylife system. Took a while until I get out the right dosage. What is certain is that every trader wants to sell its products as often as possible and, therefore, the dosage recommendation is exaggerating somewhat. Mostly loose enough half the recommended dosage.
Feeding:
Amtra Discus Mix
Tetra Tabs
Flakes
white and black mosquito larvae
Further information:
Many of the converted in my AQ things I have, abgeguckt as a suggestion from many layouts here of examples of the interior. I think many South facilities very remarkable. So an idea came to another and quasi thanks you all help enstand my new AQ. Thanks a lot for this. So, that had to be said sometimes.