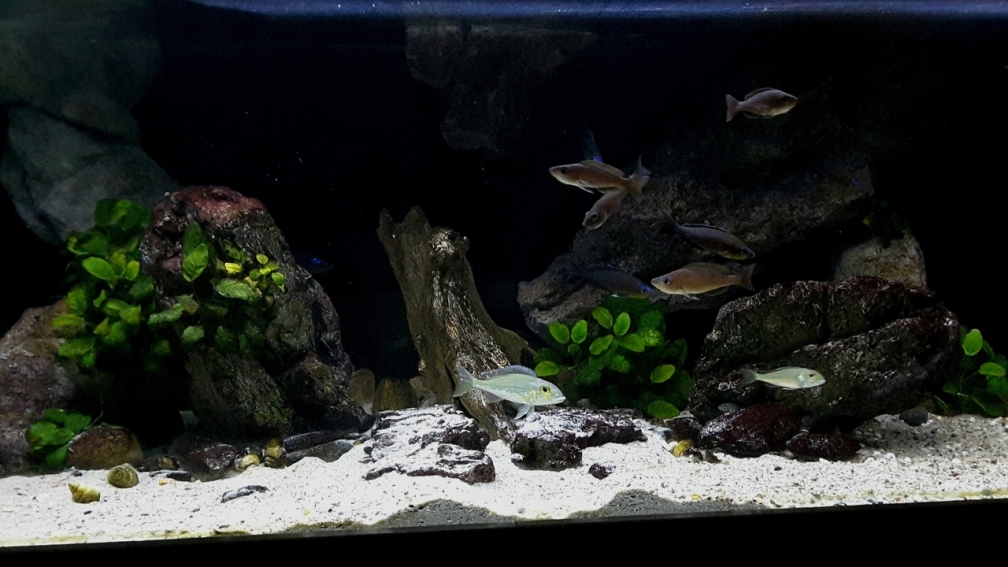 Description of the aquarium:
Category:
Lake Tanganyika
Tank size:
130x60x50 = 390 liters ~ 102 gallons (us)
Specific features:
The basin with the dimensions mentioned above is custom made by Voigt aquariums from Werneuchen. The slices of stoßverklebten basin consist of 10 mm float glass.

It stands on a self built cabinet, which was appropriately dressed for the rooms.

The cover consists of two 4 mm thick float glass
slices. One of the discs has a hole,
what the food is served.

Aquarium decoration:
Gravel:
It consists of a mixture of fine and coarse
Gravel (approximately 25 kg). I have experimented a bit and
it has become a mixture of three different gravel types.
This compilation is very natural for me.

Cyprichromis microlepidotus are schooling fish and should be kept in a group of 10 animals. You need a lot of free swimming space that should be broken down by individual high-rise blocks that serve as territorial boundaries. They reach a size up to 12 cm and should be kept in aquaria of 300 liters. High quality dry, Live and Frozen Food should be served. Because of the high vulnerability to poor water quality regular water changes should be carried out.

This Cichlieden are residents of free sand zone. They reach a size up to 14 cm and should be kept in aquaria of 300 liters and a minimum side length of 120 cm. A sufficiently large expanse of sand should be the floating joyful animals. The pool can be divided by some stones that serve males as territorial boundaries. They chew the sand constantly for something to eat and build on it spawning crater to up to 8 small towers are piled. Dry food, pellets and white mosquito larvae are eagerly eaten.
Water parameters:
PH: 7.8
KH: 10
GH: 16
NO2: 0
NO3: 10
Temperature 25- 26 C °

He will be held weekly, with more than 1/3 is replaced.
Moreover EASYLIFE water conditioner.

The fresh water is processed through a filter Reiser.
He removes any dirt and limescale, floating particles, sand, mud,
Germs, bacteria, copper, lead and much more ..
Because of the copper load in my tap water it is un-
dispensable.
Feeding:
Floken / granulate

The feeding is done 1-3 times a day in small quantities.
Videos:

Further information:
The basin is since April of 2013 and was rebuilt in March this year. The stocking has remained the same. Due to the failure of some animals after reconstruction has shrunk to 14 of the stocking 20 originally animals.