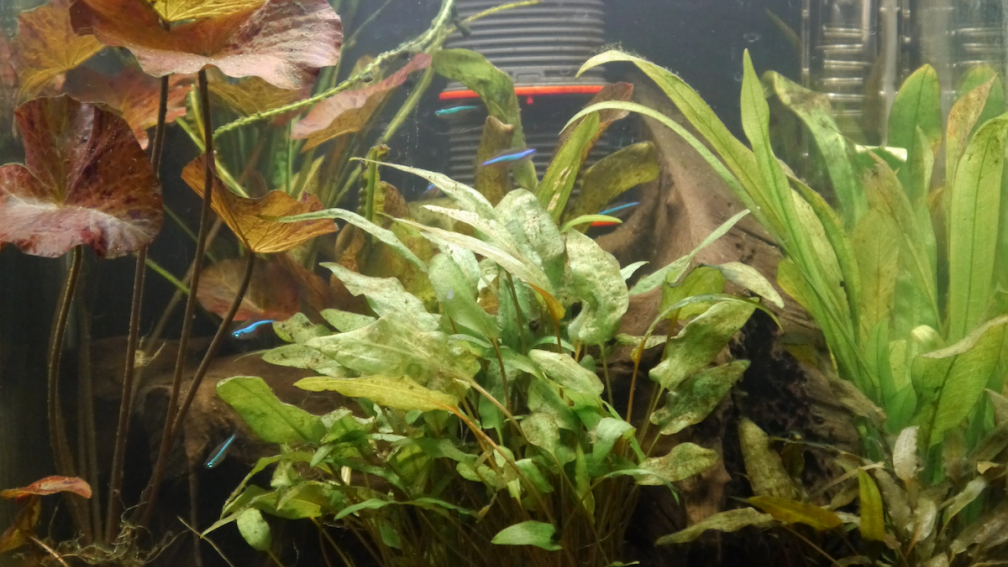 Description of the aquarium:
Category:
Community tanks
Tank size:
38x38x43cm = 60 liters ~ 15 gallons (us)
Specific features:
What began as a South Basin, was at the beginning of the year by the unexpected arrival of three very small snarling Zwergguramis the community tank. Meanwhile, the Growler are fully grown and growl to match your mood sometimes for days, sometimes several times a day (even with closed doors even in the next room clearly audible)

In early October were the Zwergguramis restarted young :-) three survived and now live with their parents in Knurrerbecken.

Special features of the facility:
a large wood root
Aquarium equipment:
Lighting:
left and right in a Dennerle Nano Light 11W, between a Dennerle Scaper's Light (24W), for a total of 46W lighting

After I had already for many years a desire to be able to simulate the twilight at least in my major (240L) Aquarium, me but I know apparatuses are too expensive - I am inspired now to EB can be (my regards to Wolfgang Engel and his huge project) and the lighting of Knurrerbeckens redesigned: As I always use three lamps in this basin, I have still bought two timers, so that now each lamp is controlled by a separate timer. At 09:00 clock starts the left (11W) lamp, at 10:30 will be added the average (24W) at 12:00 completes the right (11W) lamp, the strong midday sun. At 19:00 clock the left, at 20:30, the middle and at 22:00 clock the right goes out. Thus, the left, the sun rises and right below, lunch omitted. Each lamp illuminates the pool for 10 hours now, but overall the pool is lit up for 13 hours.

It can be seen that the Blue Neons prefer to stay in the morning and evening just lit aquariums half while daytime exploit the whole basin.
Filtration:
EHEIM biopower 200 with the standard substrate (filter cartridge = sponge, then two baskets EHEIM substrate pro, finally, a filter mat), cleaning about every 2-3 weeks, sometimes I replace filter substrate by peat)
Other equipment:
Heating is provided by a floor heating (JBL ProTemp base, 10W). During the summer months, the challenge is rather in the pool to cool (bought it in September the NanoCoolAir Eco from Dennerle which has not yet been used), the floor heating is supported in winter by a 50W heater from EHEIM.

CO2 fertilization is done by the Dennerle Bio CO2 kit (supplied the aquarium for about 30 days with CO2, so it is changed once a month)

8 Blue Neons (Paracheirodon simulans)
The Blue Neon is small with its 3 cm body length and as far as I know less widespread in the hobby as the better-known neon tetra (Paracheirodon innesi) and Red neon (Paracheirodon axelrodi). The fish are distributed in nature in the tributaries of the upper Rio Negro in the black water, so feel in torfgefiltertem, slightly acidic water most comfortable.
My 8 Blue Neons I can often observe how they swim around in the upper third in the protection of the Lotus and the floating plants. They are quite curious and like to move, but also make occasional breaks in the shade of large oak root. Your strolls through the Aquarium of the group often close to a couple of dwarf armored catfish, which are gladly received and integrated by the blue neon. These two types harmonize very well with me.

5 Snarling Zwergguramis (Trichopsis pumila)
The Snarling gourami is a very small representative (up to 3.5 cm in length) from the family of gouramis. In nature, these fish come in smaller, heavily overgrown waters with slightly acidic water in Southeast Asia (from Sumatra to Vietnam) before.
Best kept the animals in smaller groups (5 animals). I myself have started with three Zwergguramis, now they live five people in the community tank, another 24 Jungknurrer grow in a breeding tank zoom. The animals do not swim as a group through the basin, but rather scour alone plant thicket. However, it is observed that they like to relax get in touch with one another: either they remain at a chance encounter some time together and try going to impress by particularly beautiful coloring of fins (being so far always peaceful stayed), or they communicate verbally with each other , The Knurrlaute somewhat reminiscent of loud, shrill and locusts are even with closed doors, two rooms further still clearly audible.
Although I had heard before that the breed at the snarling Zwergguramis is quite difficult and in community aquariums with predators (like mine, among other things with the blue neon) virtually impossible, I now swim for the third time juveniles in my breeding tank. So far I have observed no pairing and I was always very surprised when I discovered the tiny, only about 1mm large juveniles when cleaning the tank. In hindsight, but each time was a few days before the growl even more intense and more frequent to hear. In addition, the offspring occurred every time I had somewhat neglected for various reasons the maintenance of the pool (and had about 3-4 weeks made no changes of water and was passed in the time rather rare at the pool, because then I always rarely home was). I suspect that the abgestandenere, older water the water in their natural habitat in Southeast Asia was similar as the fresher water that I would otherwise offer the inhabitants of the basin. (I myself have seen other gouramis in stagnant water in Indonesia, in which I would not have liked to keep my foot.)
Since the Zwergguramis have a very small mouth, rearing the tiny young fish is a little more difficult. The smallest juvenile fish I fed with Artemia fluid from JBL, the slightly larger seasoned with sweet paprika (the tip I found somewhere on the Internet and it worked like a charm - the small have the paprika very readily eaten). Later I feed tablets crumbles, thawed copepods and also very finely ground "pear Shrimp" fed Tetra Delica until they were big enough to eat the staple food in the community tank with.

Invertebrates:
1 Clea Helena (Helena anetome)
Although I have been baptized because of the coloring on the name Hans Hummel is obviously female, as I have discovered young about a month ago, but rarely seen.

Besides AquaSafe water conditioner as I use ToruMin to generate a little black water conditions (I have, however, exposed to the current daily water changes).

Since my Knurrernachwuchs grows in a separate 12l-tank in which I change half the water every 1-2 days and then auffülle by water from the "parents Aquarium", takes place at the moment, an average water change of almost 5l / day. For this about every 2 weeks come back around 20l water change.
Feeding:
4x for active swimmers per week either TetraPro Colour, TetraMin Junior or Tetra Rubin Granules, 2x per week freeze-dried water fleas or copepods, for the bottom dwellers a broken through food tablet (Sera viformo or Sera Wels-Chips), a "day of hunger" week

The Anetome Helena as planned eaten excellent the entrained with my plants and snails would be since then about the food tablets.
Further information:
Young at the snarling Zwergguramis (Oct 2014):
From the egg-laying of Gouramis I first heard nothing. The frog bite had the surface overgrown again and the underlying water goblet taken the light, so I wanted Absammeln many of the frog bite plants and use on the occasion including a few new plants. And I regret to the nest of Gouramis with already hatched juveniles have been broken, because suddenly swam to the surface countless tiny (about 1 mm long) larvae, and the hunting instinct of the Neons was piqued. Quick I have collected about 100 Gurami larvae and set a 12l-breeding pools for them. Unfortunately, the number of juveniles shrunk dramatically in the first few days (perhaps among other things because the food supply at first could not be assured), so that for a few days only four juveniles are left, three of which do, however, a very good impression , They grow properly (have just 6mm length reached) and eat both copepods and resolved Sera viformo very ambitious. The three I have a good feeling :-) The two largest seen even from as Zwergguramis!

Growler update on 10.28.2014:
The three remaining young fish grow splendidly and should start to behave like their parents. The two larger ones are now already 1cm long, the smaller also determined already 0.8cm. They take the form of parents, also first pigments are visible. They spend most of their time protecting Cabomba caroliniana, which I have set as a retreat into the breeding tank, in search of food can be the juveniles but very good watch, when they quietly pull through pools. Every 3 days there to eat a bit of crumbled viformo lining tablet, thawed on the other days copepods. The kids eat very much and good and make a really stable, already quite robust. Hopefully things continue :-)

Again junior at the snarling Zwergguramis (11/08/2014)
When changing the water two days ago, I met again a group of tiny larvae of snarling Zwergguramis. Although I noticed about five days earlier that the striking Zwergguramis often growling, I could see no courtship or no oviposition. During the week, I had as much to do the first time around, so I was again very surprised (perhaps spawn the gouramis prefer from when is little movement in the room for a few days?). I can catch out even more about 20 larvae, although many of these have made a very poor impression. They now swim in a small Ablaichkasten in my breeding tank because the other three juveniles have become so large (about 1cm) that I do not know how safe would the new larvae with their body length 1-2mm there. Two or three of the newly hatched Zwergguramis I was able to observe during feeding (Artemia JBL fluid). Hopefully they grab it!

Update from the breeding tank (11/11/2014)
Unfortunately, only lives a new Growler larvae, and also reacts barely. The chances of survival seem to be very poor, from the first nest only three Gouramis have survived, now the second nest probably not ... But after all this is the three from the first time well, today it was the first time crumbled "brine shrimp" Tetra Delica. They swim very confidently through her pelvis and are constantly in search of food. Maybe I feed in the next few days several times a day (the dust feed naturally spread quite strong at the 12l water because the foraging falls little more tricky ...)

Reshaping of the pelvis and Growler junior # 3 (02.17.2015)
After a long absence here's a quick look back at the last three months: from November-young, who was very weak from the start, no fish has come through. The three juveniles from October offspring are, however become so great that I could put them in December to the parent animals and other fish into Knurrerbecken where they have since feel on top (only when I pull out the camera, they are shy and dressed in the plant thicket back).
To the fish [...]