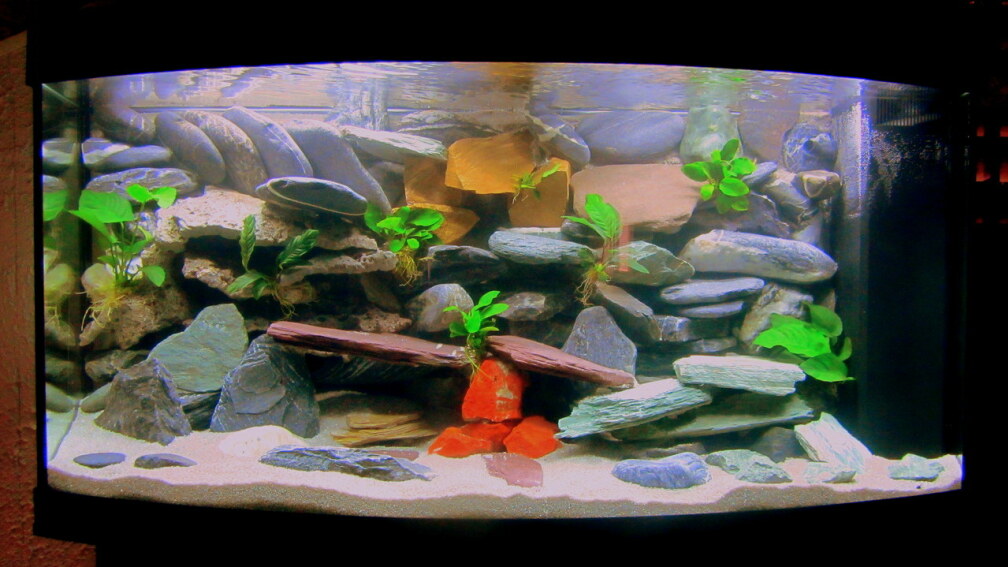 Special features of the facility:
In the aquarium polystyrene was glued with silicone to both the rear wall and for the ground. The polystyrene panels should not be too thick, as they develop an enormous boost! A large area with silicone glue. To customize the back wall I put the aquarium on the back and applied as 1- 2cm tile adhesive. In this, I then pressed bricks of various kinds. Here, I've made sure that countless caves and fissures of various sizes occur. To make the tile adhesive "invisible", I still interspersed aquarium gravel. After a week to dry, I then asked the aquarium upright. Unfortunately, it was not possible for me at the diverse structure of the back wall to push the gravel everywhere. So then the gravel has been solved in some places when getting up again.
For the structures in the middle part I have also applied tile adhesive on the bottom polystyrene plate and am so proceed as in the back wall.
Some stones I also glued together with tile adhesive.
Let it rest for a week now again.
Here's a tip: sharp slate or other stones can be treated wonderfully with a coarse file / rasp. When edges have to break you but then make sure that the slate is not, by too much pressure, is divided into individual layers.

Aquarium equipment:
Lighting:
The aquarium is illuminated with 2 x 54 watt T5 fluorescent tubes, but which I have partially masked with aluminum foil because me the light seems a bit too bright.
Is illuminated from 7:00 clock - 19 clock. Then it's to create a further 2 hours with blue LED to an evening atmosphere. (I have retrofitted)
Filtration:
Internal Filter Bioflow 6.0
The filter creates 1000l / h
The entire aquarium water is thus approximately 4 per hour circulated times.
In the filter are different sponges and filter media, should be sufficient for ordinary maintenance to allow a slight overstaffing with Malawi.
Other equipment:
Heating element, integrated in the filter. My Aquarium is currently running at 24 ° C, with addition of the fish I will then at 25 - 26 ° up regulate

All of these fish are normally about 8 (w) to 10 cm (m) high. So come about 2 liters of water per cm fish. When filtering quite possible.
The possible aggressions of goats will be split into several fish due to the high number of fish. and through the many caves and crevices enough retreat possibilities are created that the fish can escape repeatedly to stressful situations.
At least I think that;.)


On 28/02/15 all the fish are doing well. The areas are distributed and the saulosi-Bock is the number 1 in the pelvis. Mpanga and flavus but defend their territories successfully. However, this results in no injuries. Now and then one sees a weakened from brooding females injured fins. These heal by omitting the juveniles back very quickly.

In the basin there are always plenty of young fish, which I then once abfische month after a major water change.

The nick name will not attempt to recreate juveniles. Only the flavus Bock grabs a when this is not so is still very young and on guard.

in the past I've had good experience with cucumber and spinach, so I will pass this on occasion.

I feed 6 days a week once a day. Granugreen and granured be very well received, as Tetra Algae Pro. (See photo below technique) Also cucumber and iceberg lettuce are gladly accepted. On Mondays then feeding pause.
Videos:

Further information:
At first it was feared that juveniles would be ill removable. I solve this, where I'm doing a large water change. Here, the water level is reduced so far that only the lower caves can be used to escape. Here the young fish are then expelled from the mature animals and they are relatively easy abzufischen with a large net.