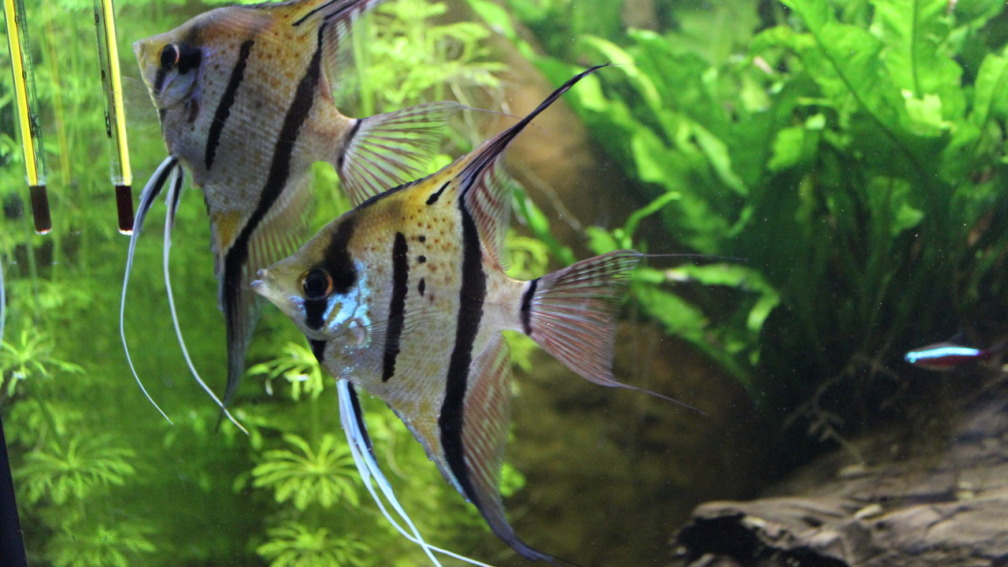 Description of the aquarium:
Category:
South America
Tank size:
150cmx50cmx60cm = 450 liters ~ 118 gallons (us)
Specific features:
The cabinet is a self-made of the first owner of squared timber, a kitchen worktop and an Aquarium Pad from JBL. The three doors which are hiding the technology and many utensils made of plywood, with handesüblichen furniture handles made of aluminum and with magnets on the square timbers gesichert.Hier the builder has been thinking right, thank you.

Special features of the facility:
Four different sizes Morkienwurzeln, petrified roots, two clay pipes, a water bowl made of plastic in rock optics (filled with sand for my Corys), a coconut cave, glued back wall of clay, petrified wood.
15/02/2015
A few clay pipes added, for the new roommate (3xL333).

Aquarium equipment:
Lighting:
Originally there was a time T5 suspended luminaire darüber.Diese I replaced with a 150cm long LED wardrobe lighting which is controlled from morning to evening in 1100 clock 2330 clock using a commercial Zeitschalzuhr. Here the data (provided by the manufacturer, Creative lights Light and Design).
Luminaire with modern LED technology.
Very low in energy consumption, very long life of the LEDs
With pull-out Poolside Planted bracket
Simply attach: You can lay it on the side window
Suitable for aquariums of about 150cm - 160cm (other sizes are available)
112 LED white 0,5 watt - 10,000K daylight
8 LED blue 0,5 per watt for moonlight function
Light output 5640 lumens, so another 50% lighter than its predecessor.
Light color 10,000K Daylight
Slimline case: ca.146,6 x 12.5 x 2.3 cm
Alu black with transparent plastic cover
Absolutely safe by external 15Volt low-voltage transformer
Consumption only 60 watts
Blue LEDs are individually switchable
Switch position 1: Only blue moonlight
Switch position 2: Complete Blue and White
Energy efficiency class: A + on a scale of A ++ (most efficient) to E (less efficient)
Weighted energy consumption: 60 kWh / 1000h
Filtration:
The filtering is performed on a Eheim External Filter Professionel 3e 2078. I use the numerous possibilities which this filter does not provide (USB Connection option for programming and updating of the filter via the EHEIM ControlCenter with the EHEIM Interface, electronically controlled alternating flow ensures the aquarium for natural flow conditions, the constantly changing, electronic switching between 2 adjustable flow rates on a 12 hour cycle, etc), but it was cheap to purchase with warranty and am with this part hochzufrieden.Der filter has four baskets I equipped with a EHEIM Media Set for professionel 3e 2078 ,
20/01/2015
Have forgotten to wear here after I become two of the four baskets of Siporax the company Sera filled habe.Bin very happy with this filter medium.
Other equipment:
Under the ground is a Dennerle Bodenfluter with 50 Watt, a Duomat is also brand Dennerle controls the flood and the water heater (a Eheim Jäger Precision aquarium heater with 200 watts) the water temperature is 27 degrees, a CO2 system Space powered by Dennerle 300 the plants with CO2.Gesteuert is the light and the CO2 addition, the time fewer than twelve hours of operation (from morning to evening in 1000 clock 2330 clock, we are only at noon around 1500 clock at home, then you have a little longer to look) are two commercial Zeitschaltuhren.Ein Dennerle Profi-Line CO2 long-term test Correct completes the CO2 plant ab.Das water exchange system in and out is recently (Christmas 2014) in my possession. Value Dazzle device and worth every penny.

Water parameters:
PH 6.8
GH 7
KH 4
NO2 undetectable
NO3-10
The water temperature is now 27 degrees, the temperature was raised to recommendation by 1 degree.
The weekly water change is usually 120Liter, but also can even slightly higher or lower ausfallen.Alle three weeks or as needed, I give three to five almond leaves and twenty to thirty alder cones (which I incidentally collect himself) hinzu.Des Further, in every water change the manufacturer (Diskuszucht A.Schmidt) the recommendation of bacterial cultures, vitamins and minerals added.
Feeding:
Daphnia-alive and dried, white mosquito larvae live, frozen and dried by amtra Krill Pacifica, black mosquito larvae, brine shrimp, frozen, JBL NovoBel, JBL NovoTab, JBL NovoFect, cucumber slices, carrots and since short JBL PlanktonPur the very seem to like.
Videos:

Further information:
Hello There,
The proposed pool was established on 04.16.2014 and the stocking came on 09.05.2014 to the pool. I think that was a bit too early, but I could not take it anymore ... a weekly water change of about 120 liters is carried out, is revalued the fresh water with Dennerle water conditioner AveraProtect, vitamins and minerals from the Diskuszucht A.Schmidt and bacterial cultures, also of Schmidt.Einmal week is fertilized, a universal fertilizer by EasyLife.Dazu come, as required every three weeks 3-5 and 20-30 Seemandelbaumblätter alder cones which I myself collect.