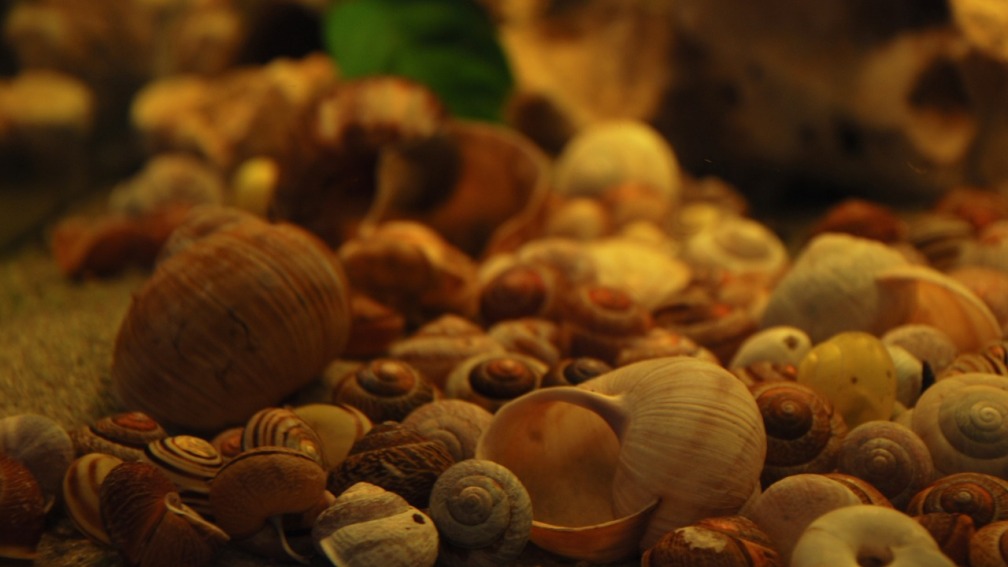 ~ Holestone with many refuges for fish

Exposure Duration 08:00 until 18:00 clock
Filtration:
~ Elite Stingray 15 (in addition to the original filter media edge stuffed with filter floss)
Other equipment:
~ Elite heater 50W
Stocking:
~ 0/1/2 Neolamprologus multifasciatus - Striped shell dwellers
The midgets of Lake Tanganyika.
The multi-striped shell dwellers (Neolamprologus multifasciatus), or Multi, one of the cichlids and lives endemic in Lake Tanganyika in East Africa. It belongs to the group of snails cichlids and lives in the lake in large fields of empty snail shells of the genus Neothauma, but it also breeds in the rubble zone in rock crevices.
The species forms colonies in which the members take up only a relatively small territories and press the juveniles as brood nursing assistants, ie they help in the defense of the district and in the care of their younger siblings. Males reach a size of up to 4 cm, females stay somewhat smaller with about 3 cm.
It is a well-suited for aquarium fish as they can be (at best from 54 l) maintain in relatively small pool and is easily imitated. A recommended stocking of such a pool is as a male to two to three females. But a pair of attitude is also possible.
Neolamprologus multifasciatus can reach an age of more than four years.
(Source: Wikipedia)

The fish for a civil engineering office.
The aquarium stands with me at work surrounded by industrial building planners. Since a couple of small architects are exactly right on the square.

Husch and he was gone ...
Hard to believe can hide these small animals purely in a snail shell as far. A little anecdote from the purchase:
Saturday morning. I eagerly anticipating the merchants - my small multinationals are waiting for me.
Denkst'e.
But first from the beginning ...
Two females and one male completed their laps together with other fish in the merchant pool. A perfectly matched group for me. Sometime I just knelt in front of the pool and just watched. Yes, I want to have.
So caught a seller (what Saturday is not easy) and ordered the three dwarves. Seller shall, in the water transport bag. Nets into the water.
Fish away.
Ok, well you can not be. Only to get out the roots.
No fish there.
Stones out.
No fish there.
Plants out.
No fish.
A snail shell after another searched.
Yes! A fish there!
But of course, made of absolutely no move from his safe hiding place to get out. No problem - I have plenty of time ...
1/4 hour later - two females swim in the pool. No trace of the males.
Seller called again. Nets into the pool - fish away.
But this time I knew at least where one of the two females is gone gone (should at three snail shells not be so difficult thinks yes you). So the snail, including fish shipped in the Tansportsack.
And at some point I discovered the tail fin of a second fish in another screw. But the third? Not a trace.
After an hour had passed by now I decided to take time the two prisoners in their new Quatier and to come back another day.
Three days later...
Male swims in the merchant pool (where now only two snail shells along with other decorative products). I watch the males - all super.
Seller will - landing net into the water - fish away.
Neiiiiiin !!!
So again wait one lap ... and one more round ... until I finally just wrapped both snail shells. In one of the two the Lord finally had to be. And sooner or later, but the lure of women, new homes and the new pool will hopefully lure.

End of story:
~ 2 1/2 hours from the merchants for three fish.
~ Three "Leihschneckenhäuser" from the merchant pool in my aquarium.
~ And lo and behold: 3 Fish, who now wanted in their new world, a new home and already merrily going courtship ...

So you learn:
Take the shell dwellers, including House. This saves a lot of time and stress (for humans and animals).

Successful mission, I would say. : o)
And since the buck in the pelvis, the two females are no longer quite so shy and do not disappear immediately at the slightest movement in their hiding place.