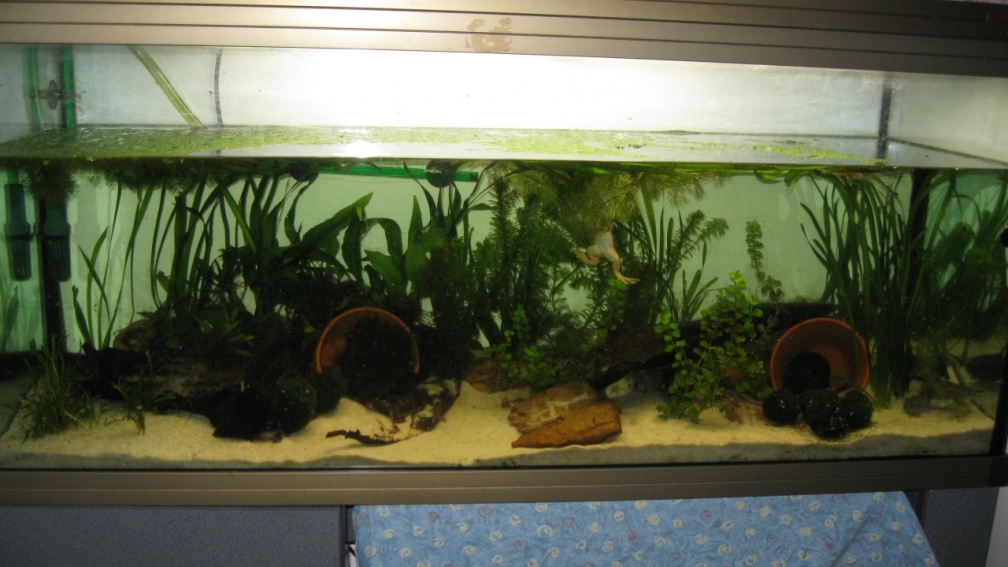 Description of the aquarium:
Category:
West / Central Africa
Tank size:
120x40x55 = 170 liters ~ 44 gallons (us)
Specific features:
This is an Eheim Aquarium, which I bought used for 10 € incl. Base unit and cover. It actually has a volume of 250l - currently it is not but filled to the very top. Whether it stays that way or not, I can say, when the frogs are fed only. I do it depends on their behavior, should point out that you like and swim a lot, going to make the aquarium full. Mometan it looks here as though it would remain at the low water level because Gitti during feeding often jumps up and a full tank increases the risk that they then bounce very low.

At first I had coarse gravel in the tank because it is in the literature so often stated. But then I changed directly on sand, as I have found reports that frogs have gravel swallowed by mistake and have died because some of them had the whole stomach with gravel filled. Also, I've heard that they like to dig. I am very excited to find that out for yourself.
Plants:
Currently, the following plants are in the basin:

I very much hope that at least some of the plants will withstand the clawed frogs. Many people say that they dig a lot and also destroy with their claws the plants. I hope that at least the aufgebundenen plants (Anubias, Java fern) will survive and Riesenvallisnerien that grow like weeds yes.
As at 30.04 .: Previously dwelling plants were hardly damaged. From time to time what is sometimes excavated, but that's about it.

However fertilized is not because I have read in several places reports that amphibians with aquatic plants fertilizer could not cope or after fertilization deaths have occurred. But the set is plant species are also likely to do without.

Special features of the facility:
I tried using stones to build a small terrace, so that the sand is back a little higher than the front. The stones are lined with Styrofoam and there is no sand under it, so they can not be undermined.
In addition, roots are in the pool, these are exactly like the two clay pots as hiding places for frogs.
Seemandelbaumblätter I have also been pure.

Then have the frogs still 1h dawn because the BirdLamp burning in the room nor to 22.00 clock. During this time, they begin to take action to correct.
Filtration:
I signed up for the Eheim eXperience 250 (2424) decided. With a hopper capacity of 6l this has according to manufacturer a pumping capacity of 700 l per hour. The used filter material is enclosed by the manufacturer: 3 x filter mat 1 x filter mat, Media +: with EHEIM MECH and SUBSTRATpro.
Other equipment:
The pool is not heated and is therefore not equipped with supplementary technology.

Feeding:
Is lined with frozen and live foods.

I Fütter the frogs with tweezers, so I have an eye on it, who gets how much. In addition, then not as many remains are in the pool.