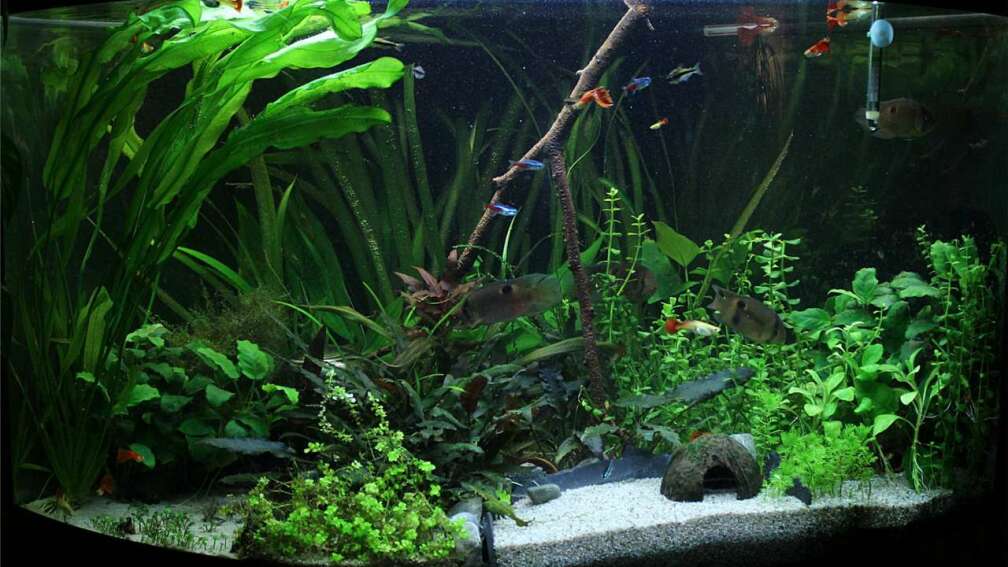 Description of the aquarium:
Category:
Mixed America tanks
Tank size:
70*60*98,5 = 190 liters ~ 50 gallons (us)
Specific features:
It is a jewel of Eckaquarium. Thus it fits perfectly in the corner and does not consume as much space as a 100 or 120 cm aquarium, but still offers a relatively high volume.
Moreover, one can fairly high plant care.

The sand and gravel are separated by shale. So it could be avoided that it is completely mixed.
Plants:
Vallisneria:

- C. wendtii "green"
Seems to keep forming after a month slowly the first foothills
- C. wendtii "brown"
Grows very well and has taken over the entire front area with C. walkeri
- C. walkeri
Grows very well and has the entire front area with C. wendtii taken
- C. crispatula var. balansae
Believed to rel. well in the basin. But increasingly not great
- C. parva
Has a few individual remnants that are not included, but also not multiply.
- C. lutea

- L. mauritiana
Is very received, but keeps a little.
- L. brasiliensis
After it is initially received, it is growing now, were mounted since the reflectors again.

-A. Hastifolia
The leaves turn brown partially, but the plant continues to grow. Meanwhile, three leaves
reaches the surface
-A. barteri
Grows slowly but steadily and overgrown the stones and roots.
Sagittaria:

-A. purely ecki
The surface is growing fast and has already reached to ~ two weeks. Loses down but leaves
-A. purely ecki rosaefolia minor
Growing a little more slowly than the normal A. purely ecki

- R. fluitans
Yesterday bought new. Let's see how she does.

- L. cardinalis
Hope you will as large as it is in my other tanks.

Special features of the facility:
A root, grow on the Anubias barteri and Taxiphyllum Barbieri.
These two perforated bricks. On one of the two is also growing A. barteri

Aquarium equipment:
Lighting:
The lighting currently consists of 2 x 28 Watt High-Lite Day and two reflectors. Is controlled by a programmable clock.
Is Illuminated 9:15 to 13:15 and 15:00 to 9:45 p.m.. Depending on the season and the sun light lunch but is omitted or extended.
Filtration:
Is filtered by the filter Bioflow 3.0, which has all filter materials, except the activated carbon.
This occurs only after use of a medicament for use.
Other equipment:
Heater 200 Watt
But is hardly in-hand. But assumes only 20 degrees on its service
Stocking:
- Inpaichthys Kerri (7W | 5M)
Entertainment:
Group of fish, the areas occupied.
The males occupy at feeding with frozen and live foods small territories and defend them against conspecifics and Different type of fish. Currently, the pool is only big enough for three areas. I. Kerri occupied my observations after areas namely love in tall, dense plants. Here, however, low plants are mostly in the pelvis.
The males could already move to spawn several times the females. The spawning but was always immediately eaten by the roommates.
Water levels:
dGH: 2- 20 °
Temperature: 21 - 30 ° C
PH: 5.5 -8.0

- Ancistrus sp. (1W | 1M | X junior)
Have already spawned three times. The youth has always lost in the filter. Approximately half of the young is white, the other half brown.
The female is currently with about 7-8 cm larger than the 6-7 cm large males.
It probably lives only an albino of the last litter.

Water change:
Min. 1x a week 50%
Feeding:
Live food, there is relatively rare because it is not too common in the counter to buy here. But four times a month that is already there.
Mostly there are alternately frozen food and flakes from different manufacturers.
Right now is
-sera vipagran
-TetraMin
-TetraMin Menu
-Hikari Sinking wafer
-Red and white frozen mosquito larvae
fed.
A feeding pause there about once a week, sometimes twice. Depending on what time I have to work.
Further information:
A Söchtinger carbonator in the basin. Algae have gone back since.