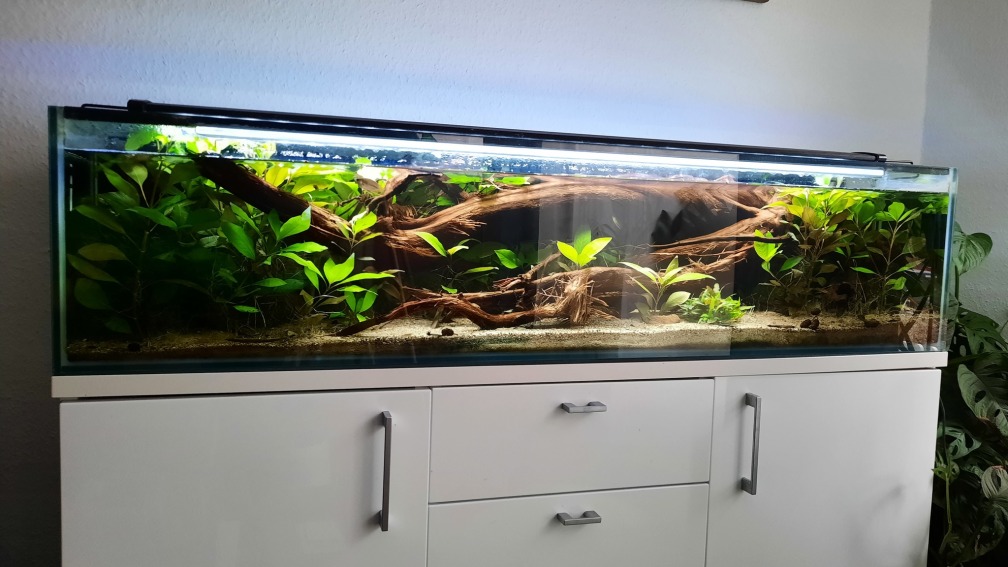 Description of the aquarium:
Category:
Asia / Australia
Tank size:
130*40*30 = 156 liters ~ 41 gallons (us)
Specific features:
Once again it is in the basin to a special design that has been manufactured to fit this time sideboard. Manufacturer is the company Voigt aquariums in Werneuchen near Berlin. The pelvis is made of 8mm thick float glass and glued with transparent silicone. Perfect fit to I let me make a three-part glass cover of the Fa. Voigt, which is sliding on the entire pool length in two plastic E-profiles. As an additional service to me four glass fins were glued to the Hamburg mat filter according to my guidelines in the corners at the factory. As an all-inclusive package the pool cost me just 75 EUR.

When a cabinet glossy white sideboard Furniture force (original price 255, - EUR) was abused. I have picked out the closet with the move, especially after the viewpoints of strength, because my 90 liter tank should take it place. The cabinet has 4 cm wide and 2.5 cm wide Central sidewalls. For the 156 liter tank of cabinet was slightly redesigned because of the significantly higher total weight: The shelves were superimposed vertically provided as additional support back in the closet, because the back wall, unfortunately, consists only of a better board. In addition, 8 Squares have been integrated into the cabinet as additional supports.

Only shortly before the establishment of the pool, I decided finally to light gravel. One way that I had ebendfalls contemplated was the black ADA Amazonia gravel. The barbel would certainly be happy because they prefer dark ground. The prawns were certainly very well come on black gravel advantage. However, two criteria spoke for bright substrate: Firstly of course the price, I would have spent well over 100 EUR at the ADA variant, on the other hand, I am just on the look of the bright substrate in conjunction with dark burl. It may be that I disagree sometime and umsteige on black gravel, yet I am but with the savings option of Hornbach (9.95 for 25 KG) very satisfied.
Plants:
Microsorum pteropus (Java fern)
The Java fern is native to Southeast Asia and, of course fits perfectly with the theme of my pelvis. It grows very well on stones and roots by aufbindet him or plugging in holes. It should be noted that the roots are not buried, as they can go moldy in the substrate and the growth can be adversely affected. Tip: when the iron deficiency Javafarn very often reacts with black spots on the leaves, so care should be taken to an appropriate fertilization. Older Javafarn leaves turn brown and can be easily peeled off by pulling gently from the rootstock. Javafarn has little claim, it grows in water temperatures between 20 ° and 28 ° degrees and does not require excessive light.

Cryptocoryne wendtii "green" (green Wend Tscher water cup)
The green water goblet is an ideal plant for the middle pelvic area, which every aquarist brings joy, especially by their unpretentiousness. In soft or hard water it grows equally quickly and by their bright green eye-catching in the basin. Currently, there is, unfortunately, only a small remnant of her in my pool because the water friend apparently enough nutrients and light lets her left. However, I should like to renounce not this pretty plant.

Java moss (Taxiphyllum Barbieri)
In spring 2013, I spontaneously bought a pint of Java moss on a range display in the ornamental fish forum, since the price was really tempting, and I once again wanted to make an attempt for a long time, Java moss to grow on my roots. As the moss was delivered by post, first made his disillusionment: The herb was littered with tower snails, it I had now no desire. So the whole story first inserted one hour in mineral water until the stowaways were decimated. Since it lacked after the waiting period of motivation to bind in hours of work, the moss on the roots, I just put 4-5 more moss-balls in the root depressions and discovered a few days later that the Java Moss despite the unloving treatment some new shoots spawned. After about a month ago to the moss spread then more than presentable at the roots of. An unpleasant side effect was that my previously seemingly successfully fought snail population had seen gradually returns.

Hygrophila polysperma (Indian water friend)
I sat in my pelvis largely on the Indian water friend, because the plant is really easy to clean and robust for many years. In addition, it is growing rapidly and sees in thick bushes beautiful. At one point I had my 90-liter tank once largely planted with Javafarn which obviously slowly but surely made the Hygrophila culture finished off. Now the tide has turned, the Java fern does not want to really, so I have the deep green collar plant used again and it is thriving.

Anubias barteri var. Nana (dwarf Peer Journal)
I know in a Southeast Basin this plant has lost nothing. Still, I've even indulged in a pretty plant, because I find beautiful, first and second'm curious for years whether Anubias would ever grow in my pelvis. The experiment can thus begin ...

In previous pool I have set exclusively on Java fern and a dense floating vegetation, which I found very visually pleasing. Since I have but disposed of a greater amount of unsightly water fern offshoot when Beck exchange and Java fern grows known bit slower, I have next to the Crypts also two fast-growing species of water friend [...]

Aquarium equipment:
Lighting:
20W Beams Work LED light
(Unfortunately after an excursion into the water with a currently unsightly loose contact, who wants a comparable LED light sell cheap or a cheap source knows, can feel free to contact me)
Filtration:
Filtering is done on two corner HMF, Matt Size 20.5 x 29.5 cm each, operated by a AquaBall pump head without filter baskets (left) and an aqua ball 130 (right). Both pumps are throttled to the minimum power.

On the idea to operate a hamburger mat filter, I came two years ago. Back then, ran in my 54 liter tank still a simple Eheim Aquaball, who made himself also paid a peat filter. On the Internet I found often on Beck ideas with a HMF and inspired me quickly for the biological type of filtering. It was clear that a hamburger mat filter had in my next pool. Even before the 90 gallon aquarium was even in prospect, I began planning the HMF. The mat size was calculated, the material was purchased and eventually I was allowed in June 2011 finally take the project HMF in attack. The filter was then operated with a Conrad Zimmerbrunnen pump, gradually, this turned out, however, especially at partial water changes to be extremely susceptible to interference, so I decided to press my good old Aqua ball in the clear water chamber. To my delight it fit wonderfully and did the job much more reliable than its predecessor, so I was sometimes away for a few days with a clear conscience. To ensure the new 156 liter tank for a two-sided, easy flow, I decided on two corner HMF. Of course, the residents thus some floating space is lost, but the better filtering will pay off in my opinion. The glass webs for both Matt filters were kindly equal with glued me from the Aquarium at Beckenbau Bauer, so I did not have time to mess yourself with silicone and the drying phase of the webs also accounted for.
Other equipment:
- Jäger adjustable heater 50W (only in the winter months, set at 25 ° C)
- Nano-Thermometer

Two years ago I could not even imagined that I'd end up being a big Garnelenfan. Actually, I always had more than disgusted in front of the little critters. It started my enthusiasm by a funny coincidence. In ornamental fish forum, I have been offered by a user of a product package that he sent to me by mail At home, the individual strands were first unwrapped and sorted before I endowed my former 54 liter tank it. One or two weeks went by and I found the weekly partial water changes that anything swam in the pool, which definitely can not be a Harlequin Rasbora. Quick had switched on the lights and behold: a shrimp swam completely excited by the Aquarium. I could not believe my eyes, wondering now how the shrimp had obtained access to my pelvis. Was a possibility that she was caught in a plant and was transported as a stowaway by the post office all over Germany - the only - albeit quite outlandish. A demand by the seller of the package plants showed that this idea was not the most devious. He had in his pelvis a huge swarm back stroke prawns, including many juveniles. If I wanted to, he was welcome to send a few more me. This I declined, but a few days later bought the involuntary guest a few comrades. As I continued to busy myself with the animals, I bought another 10 Amano shrimp to which were apparently extinct significantly more delicate dorsal stripe shrimp. Meanwhile, I could not imagine a basin without Amano. It is also great fun to watch the little animals.

The Keilfleckbärblinge Been my favorite fish when I was still living with my parents and looked after there to the 180 liter community tank my mother. I loved her swarm behavior, they were also regarded unpretentious and wonderfully pretty. Our initial aquarium mistakes have meant that more and more different types frolicked in the pool, even though these were partly extremely different from the claims. With the exodus and the subsequent setting up my first, own pool, I decided to at least take my parents to harlequin Barben Swarm. No sooner said than done, which now only five-member group danios swam in my pelvis and was extended for another five fellows. I experimented with peat filtration and alder cones, which the fish obviously liked very. Again and again I found eggs in the pool and suddenly also a descendant who grew rapidly. Unfortunately the following propagation experiments were not successful, so I had to zoom in the Swarm in new 90 gallon aquarium, there was now a lot more swimming space available. In 90 Basin of any spawning attempt remained unfinished, after the re-expansion in September 2012, I discovered in my new pool which I imagine here, totally unexpected some juveniles. The harlequin Barben so felt quite comfortable in the 130cm basin, now I could count 19 small danios (as 20:11:12).

The pH is slightly pressed by peat filtration from immediately below the specified value, also on the GH itself makes use of hopefully positive impact. In the literature values ​​are from 5-15 ° dH and pH 5.0-7.0 than optimal.
Feeding:
3 to 4 times a week
div. Frostfutter (black, red u. white mosquito larvae, Tubifex, Daphnia, Artemia)

3 to 4 times a week
Flakes, granules

1 times a week
green cucumber and Sticks for Shrimps

The aquarium was filled for commissioning in 2012 to ~ 50% with backwater from the previous pool, also the right HMF was operated with a several months after running Aquaball 130. The mat of the old pool unfortunately fit on the width of not quite and was crushed down in both clear water chambers. Thus a long break-in period is unnecessary.