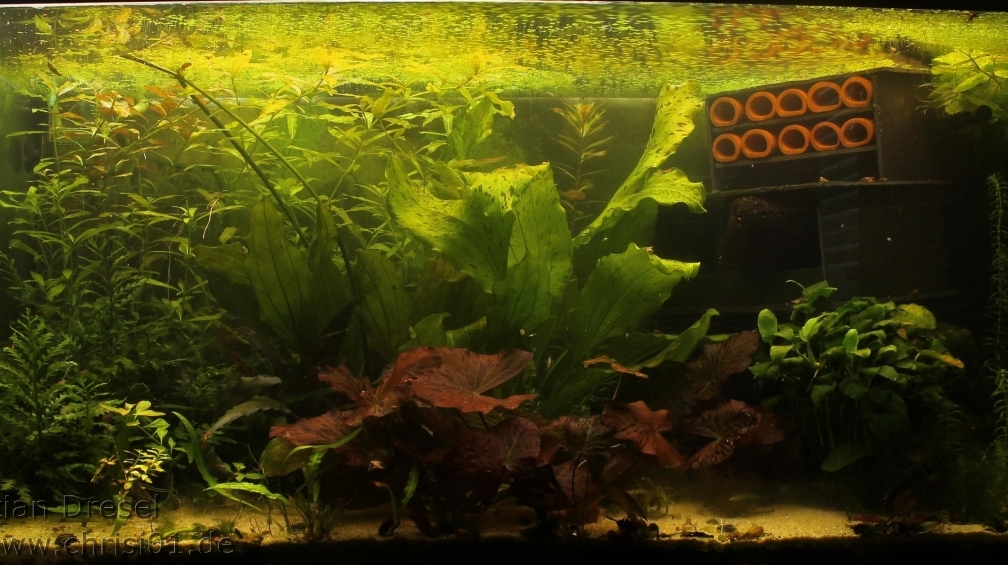 Description of the aquarium:
Category:
Community tanks
Tank size:
100x50x50 = 250 liters ~ 66 gallons (us)
Specific features:
The Aquarium is just between outer wall and closet in the bedroom, about 1 meter away from the bed. I can therefore wonderful evening watching the fish before you fall asleep finally.

Total photos were all taken directly from my bed as I also in the evening see the aquarium.

The rather not so nice pictures still come from my old Canon PowerShot A460. But as this is not a very good pictures was just possible I've gained with now a Canon EOS1100D, which the more beautiful pictures were taken

Aquarium decoration:
Gravel:
50KG game table sand from Obi. Washed several times and then directly into the pool. 2,99 € per 25Kilo is a great price. You just have to respect the plan, it is pure sand and no chemicals to animals is contained.

Because of the recommendation:
I for ages used already in some aquarium sand box game. As long as he free from pollutants (draufsteht added that no funds were mixed) and is washed well (otherwise the pool for weeks hazy) works great (you need but still have some patience until the pool is really free of any turbidity, you it may here recognize in some pictures where the basin still "dirty" acts as the pool was only a few days old and therefore had not yet crystal clear)
Plants:
- Echinodorus GreenFlame
- Waterweed
- Anubia
- Cryptocoryne
- Red Tiger Lotus
- Some unknown mainly stem plants

The plants may all still grow well. Here was massively transformed and so also replanted a lot. It now takes everything a little, until I have a nice bush again.

Special features of the facility:
- A small cairn
- A larger cave with attachment for pangio and Tatia Perugia

The stones were in the Thuringian Slate Mountains even collected (if someone comes into the vicinity and also wants to collect the B281 Eisfeld - Neuhaus am Rennweg lends itself very well). They were then screened home and thereby examined more closely. From the red rocks but many are kicked out a few I've risked use. After more than 1 year I can not say anything negative about the stones and would again at any time using .. Also grossly soiled stones which are or have oddly looked immediately flew out again. Really sharp edges were also not be tolerated. Then what is left over was boiled in a large saucepan. They were then placed for 24 hours in a bucket of water to look at whether they give oil which was the case in any stone. Only after they have been glued with aquarium silicone and introduced into the aquarium. The caves are very well received by the pangio they scurry managed almost exclusively among the stones around.

On the cave then is another cave built by L-Numbers oasis.
The lower tray is filled with stones and because it is open at the back and behind the same sitting of the filter, there is also a good flow is present. The pangio like it very well. In the upper part Tonhöhlen are accommodated rearward tapering. This is the home of Tatia Perugia, very happy to accept that caves at the surface. This design is a custom-made especially for me and the aquarium.

On the left side is still a heap of stones. This Cairn is very loose settled wordurch many caves and shelters for Thorn eyes and Corys arise. They can be clearly seen on the last picture which is, however, arose shortly after the establishment, now everything is covered a bit tight. This cairn is not glued but is loose in the aquarium.

After more than 4 months of use I can only say:
It comes with LED

I have taken note of 54x1W Satisled. Total costs amounted to € 90. There are 21 LEDs with 3500K and 6500K with 33 LEDs. All LEDs run at 350mA which is about 1W per LED. With ballasts the power consumption is 70W exactly. A comparison with 2x39W T5 and pointed reflectors shows that the LEDs are only minimally darker. Plants grow properly and I'm very happy with it.

The pool is visually much brighter than with 2x30W T8 which was initially above the aquarium.

I would arrange almost in the range "high light tank". An LED control will follow soon.

Currently, the lighting is still switched from 11-23Uhr, but as soon a homemade Aquariumcompuer follows the times to be adapted.
Filtration:
Also, the filter has been replaced. The old Eheim Filter flew out and I got from JBL to test a JBL Cristal Profi i200 get greenline. This filter works properly and produces a really good flow. This is absolutely no comparison to the old Eheim 2213 filter. The water is now also much cleaner and clearer.

- Currently, I use liquid even touched from the powder as fertilizer Ferrdrakon. This will soon be added automatically by the aquarium computer with a metering pump. Currently I still fertilising daily by hand.

- The cabinet has been modified slightly. Although the aquarium fits exactly into the gap between wall and cabinet but as the carpet a skirting board has, the lower Schank did not fit. Since I had no compass saw in the house but a wood grinder I unceremoniously from the bottom of the base unit on the side of the outer wall 2cm ground off so that it fits there. The white on the wall on one photo comes have concluded the still lay on the cabinet as such supported by the sanding dust him into the bedroom

Stocking:
- 14 Corydoras schultzei "black" (black armored catfish)
- 11 pangio
- 7 Perlhuhnbärblinge (I currently have 25 pups in wedge pool swim when they are large enough is considerably increased here)
13 Tatia Perugia (there are no bottom-dwelling fish, they swim really only at the surface around)
- Many many RedFire shrimp (I'm starting a month to the 100 shrimp out the really multiply very well here)

The fish I can not count it always hide too many. I can only assume that I have used.

Water parameters:
KH8, GH12, PH is just under 7.5. Conductance varies between 600 and 750uS / cm (shortly before the weekly water changes more towards 600 after water changes due to the higher conductivity in the water again change direction 750)

NO2 is naturally 0. NO3 and PO4 I have not measured, and since all the plants grow well and I have no more algae problem I do not see why I should necessarily spend money for water testing?

Temperature varies slightly and is in the range of 23 ° C-25 ° C. Collect this as always to keep the temperature at the level exactly clear naturally.

Weekly 30-70% water to be changed, depending on your mood and how much time I have and how much it is necessary.
Feeding:
- Frozen foods (black, white and red mosquito larvae, Tubifex, Mysis, Artemia mixed cross which reminds me of grade in the freezer in the hand, so do not have a fixed plan when there is what may happen sometimes that there for a week just the same. are)
- More and more often now microworms, Enchytraeen or live Artemia as live food, currently about 1-2 times a week mixed this time but which is served only as a supplementary food. Staple food remains frozen foods
- Living Often, from the rain barrel black Muelas. Water fleas and red Muelas are always at it.
- Garnelentabs itself is made of peppers, Papirkapulver sweetened, nettles, frozen food cubes (usually Muelas), duckweed, leaves, cucumber, zucchini and more what me so falls into the hands and prawns Good is all mashed small and dried.
- Because I keep getting given dry food, this is also often fed times. Is it a pity to throw to

A fast day is almost always inserted per week. But is not always the same day.

In order for the Corys also gotten something to eat I now considered a trick to me. Since I do not thaw frozen food in principle (reason below) I let a frozen food cubes in swimming pools to which it overthrow the other fish. While these are so busy I take the 2 dice and put it to 90% in the sand. The Corys pounce immediately like a voracious pack it and dig it out and eat everything off the floor. The pangio then make do with the leftovers They say they always find what and how it looks at me from somewhere they already grab their appetizers.

Now, the reason why I do not thaw the cubes:
To thaw with the yes that will PO4 removed highly concentrated as to be indoors. Well it is supposed to be inside there are aquarists who fertilize with NKP fertilizer PO4 to I save my PO4 fertilize it and thaw it not on the dice. Do that for years so and never had problems with it. 2 birds with one stone.
Further information:
For more information visit my blog
Decorate Your Aquarium