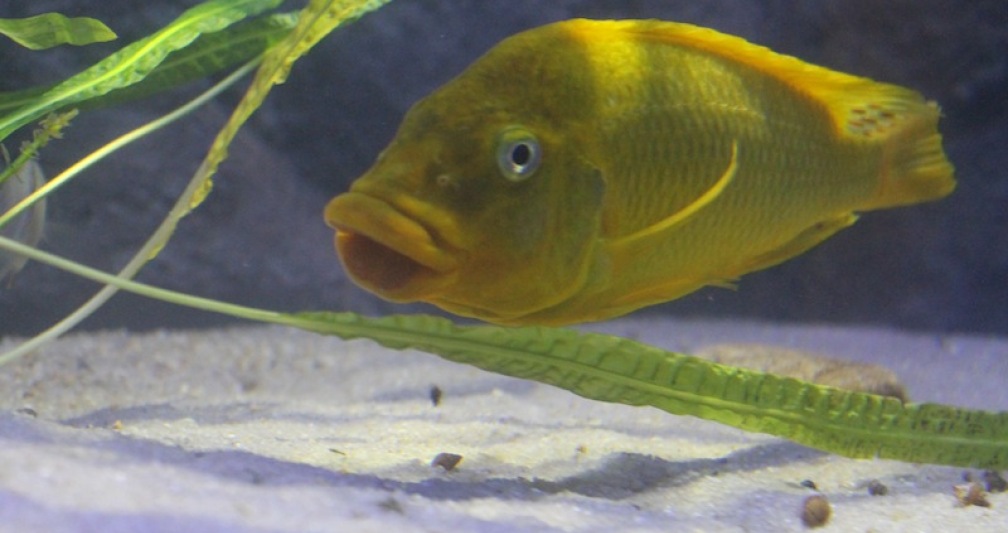 Description of the aquarium:
Category:
Lake Tanganyika
Tank size:
300 x 80 x 80 = 1920 liters ~ 506 gallons (us)
Specific features:
Is my old Malawi pool but gets the pool nor a completely new panel and another "Highlite" - I will be an extendable dining table on / in / under the pelvis to build there the new smaller apartment adapt.

From this mixture, and I now have a lot of ground height of about 8 cm. The beige / brown sand to represent sediment deposits and mixed / dispersed with and in the light gray sand. The coarse black / gray mix and the coral sand / break (if it is busy with algae) should mimic chipped rock particles.
Plants:
1 x hammer

I had been here many other plants such as waterweed and Javafarn etc pp However drinne have the all max 72 hrs. Kept and only the hammer amazingly keeps still and offer due to its size / height a super privacy and hiding place for small ,
Special features of the facility:
Again, everything is like the old pool was only a few rocks / boulders fields to set. But I have also deliberately (even though I was advised otherwise) for less is more design decision at the beginning to the coalfields in advance for the first time as small as possible to keep and to create as much space as possible swimming.
Aquarium equipment:
Lighting:
Head Light:

3 x Cree LED spots (3 6500K per spot x 3 Watt) to achieve, which are switched in addition, of 13-17 clock to achieve greater light output as well as the curling effects.

However, these lighting flies completely out of there in 80 depth is it indeed quite nice evening when it is dark outside but it's just only light and no light ... Thanks Mike (The_Lizardking) I'm going to in the near future a new lighting which build from Cree is and its control also over the GHL is at this point again a big thank you to you my dear!
Filtration:
Internal filter 60 x 20 x 80 cm (all chambers entfernd) 4 Koibürsten as pre-filtering, 3 mats PPI 10 cm in thickness and 5 1 mat PPI 20 in 3 cm. All mats are 5 cm consecutively installed and operated in cable ducts of the filter with a 4800 L / h stream pump is unthrottled with a 40 HT pipe as an outlet.

My plan values ​​so go get shut again without "tools" is not a success to me and I had to rely on the Aquadur again. I had now for two weeks, it tasted the pH to about 8 to get only with the surface movement only I probably just not enough to create this. (The Auströhmer and Tunze a circulation hinzubekommen advantage that the dirt from the ground takes / into the filter pushes and since then remains just some surface movement on the track)

Still have a week about 500 with the new filtering - 1000 L water changes take place, depending on the feeding quantities and type of feeding.
Feeding:
I have here a mixture made of various flakes as a mere feeding with eg 36% Spirulina flakes in these animals Economically simply does not work for me in the long run. The mixture consists of a 5L bucket flake food with 6% Spirulina, 10 L bucket Flakes 16% Spirulina, 1 L 36% spirulina and then come to this mixture once 100 gr 100% lake macro-algae - dry algae / seaweed sheets on " Stamp Size "crushed it.

Furthermore, I feed twice a week Lobster Eggs, Cyclops, black or white with mosquito larvae if the plant food is fed.

The feeding of wild specimens is often very difficult and I had initially also here with seaweed and stones lining work and the last non-eating zukriegen ans feed. Trying to get used to the animals now granules or pellets is unfortunately not yet succeeded me and good 90% refuse this form of fodder unfortunately and I'll feed 2 to 3 times a day a ladle full flake.
Videos:

Further information:
A little like what, why and my experiences and paths about Petrochromis:

The how and why is quite simple to answer. After 10 years hunting (mainly Malawi) I was looking for a new challenge my Malawi that I loved and also successfully bred just gave me no more what I felt earlier - "bad" words, they would "boring".

Due in part to personal life changes I decided so I go on "free" and my breeding facility and the stock flew out. The theme Petrochromis interested me for some time but when I had the first reports on the net let the subject Petro also immediately forget .. "The who's so stupid and please bring animals into the house in the value of a used small car to then 48 hours later found dead rinse. in the toilet, or to pack in solitary confinement? "

After further discussions with owners and dealers of these animals would be me then but clearly it has to be somehow yes. So I grabbed the stimulus again and I started again with the idea around to spin ... "man, it might come in a little 720 L try pools" ... Well if man is "Sardienenbüxen" or "small" Petro species like this would be also may have been a lot of sense .. but wanted or liked nor ...

So the last Malawi follow out and the decision (but still with a bad aftertaste and gut) stood at 100%, "it is the so-called" bull class "" I decided. Friends and acquaintances (90% Malawianer the rest Tangajinka) laughed at me and said I would be only "not very close in mind" that I now wanted to know more and just did not want to believe that these animals are so bad to be as you are spotted believed me but nobody at that time ... "already clear now he gives his nearly 10 000 liters Malawi Passion in order to buy such ugly and not durable beasts".

After further to collect back and forth and the eternal knowledge test (which is very difficult in these animals), I decided now to do the job properly. Here I then met already at my first obstacle - naive as I "Malawianer" was, I was convinced I'm going to my Importören and get me then sometimes just 20 of which 5 of them, and all at a ratio of eg 1: 2 or 1: 4 and, of course, prefer first offspring of a size between 10-15 cm .... or order me then stop WF unless otherwise possible and get the time in Malawi as easy in a few weeks / months ...... "ja nee is clear" :)

Here it should also be said that man in a small aquarium among 12-15 pcs. such animals should not even begin to get to ... An importer put it at the time so to me.. "If you (especially as a beginner) is not the money and the will have min 12 pcs buy no matter how big or small your pelvis is then leave it and give me the money so we burn it along because you have more of. " Of course, me most interested in the species were also the most fragile part of ... "but it would be no problem at all" ...... The advice which species and pelvic size I should take no longer went all quite apart from merely as 160cm side length with min. 20 animals up to 1920 L with your pool man can ever start because now spinning on ... The answer what is right or wrong I leave every even ...

I wanted all the animals inserting at once to possible future problems by afflict exclude equal (if possible way to accomplish this, in my view also still the best! Also I have topped up with no problems but I recommend it all at once in the "Pott clam shut" ). After I had agreed and ordered my inventory at my importer of confidence we went a couple of weeks later already. With a still bland and distressed gut feeling, we went to pick up, 7 cardboard and a "calming - beer" later I came by 1 clock in the morning back home to.