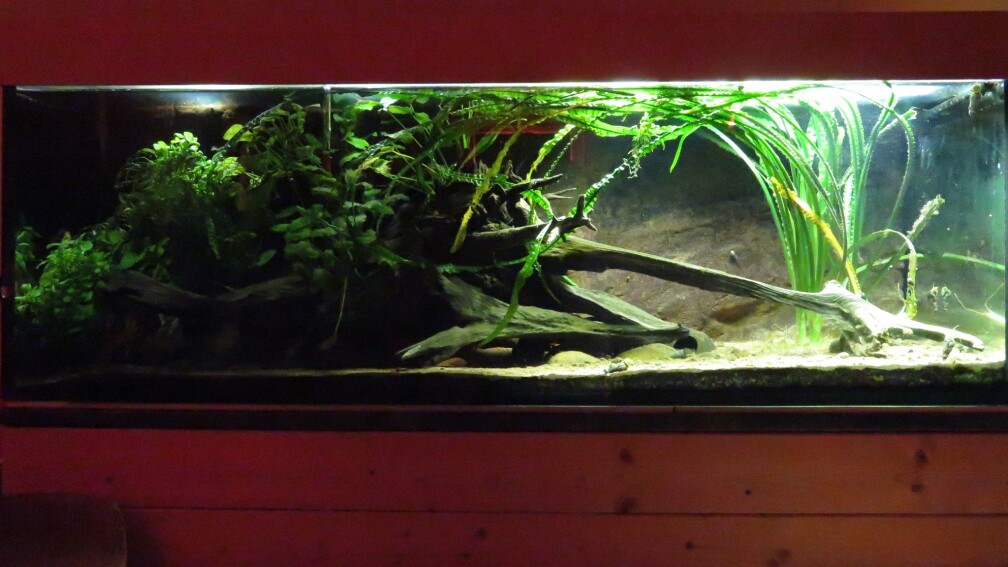 Anyone looking for information on the well-kept from me plants or animals, please let look at Google. Here are explanations of basin means, for nutrition and care of plant and animal occupants.
The water content is actually only 280 liters. The remainder consists of glass, sand, roots, stones, etc. - In addition, the tank is not filled to the top edge ;-)

Aquarium decoration:
Gravel:
20 kg very fine red sand. Scraped from a sandstone wall and then washed.
And the remnants of my original red desert sand, which is left over from the construction of my back wall.
Plants:
Anubias barteri var. Nana
Anubias congensis
Elodea callitrichoides

Special features of the facility:
Rear wall
Designed SELF
SELF projected
SELF modeled
SELF desperate
SELF fitted
SELF = Madame and I

Aquarium equipment:
Lighting:
Two tubes 120 cm (Tropical Plant Special, 36 per watt) - partially obscured
Filtration:
HMF, Matt Size approximately 50 cm x 46 cm, operated by an Eheim 1048 with about 600 liters / hr .; Matt thickness 3cm
In addition, a no-name inner filter from a 60-standard basins to filter out suspended solids. The washed out weekly during the TWW. Circulation 300-400 liters per hour.
From the flow forth the pump extends beyond the mat completely, I have the Ausströmerrohr even drilled to have not too much movement.
Other equipment:
CO²-conditioning, 32 blisters per minute (overnight shutdown of the lighting gekopppelt), since November 2012 out of service.
The heating likewise depends on the timer, thus there are slight temperature fluctuations that possibly there are in nature as well.

Stocking:
Synodontis nigriventris, 10 pieces
Ctenopoma acutirostre, 4 pieces
For accurate Catfish stocking I can not comment further because you never see any fish at the same time. It was at the beginning of 10 catfish, it is unlikely to have changed much. From the beginning, three Busch fish were eventually 5 and now back 4. But you see them rarely because it is said to bring patience ;-)
Pelvicachromis pulcher, 1.1

Water parameters:
pH: between 6.8 and 7.2
GH: about 14
KH: about 3
NO2: undetectable
NO3: about 10 mg / l
Temp .: 25-28 °
measured with JBL Easy Test
Changing the water always Saturday or Sunday, approximately 100 liters (of which about 50 liters of permeate)
Feeding:
Stand 06/2013:
Food there 6 days per week, mostly white mosquito (live), next to red mosquito (dead). The Busch fish gasping sometimes by the white Muelas when very greedy, they probably really hungry.
The pulcher have now the 4th brood behind, none of which the pups survived.
Guppies live a few days between the waterweed, so there's always something to hunt for Bufis.

Live food:
- Red mosquito
- White mosquito (I always buy 10 bags white and 2 red bag Muela's)
- Black mosquito (as long as the rain barrel supplies, stocked ton of hay for higher yield
- Live fish (From Guppyzucht I get weekly 10-15 fish, approximately 1 - 1.5 cm), once per week, moderlieschen (in summer)
- Mealworms (from the pet shop, then spiced up with oatmeal, carrots and zucchini)
- Crickets (be only a day or two with carrot, etc. Zucchine aufgwertet, then frozen in the shipping box (We do not want those things crawling in the apartment let)
- Everything so herumkreucht insects on balcony
- Ohrenkriecher (Forficula auricularia)
- Woodlice

Tip: If you feed mealworms with zucchini, the larvae go under. Make you more interesting to fish the lower regions. Besides the fact that a certain green fodder supply the fish stomachs certainly not harm ;-)

Drone larvae
In the neighboring garden beekeeper has his booties, over the weekend (06/2013) has supported this some context into the house. When I asked what happens to it, he said that he can peck the drones of the birds. Wow, I have found new fodder. Due to the diet with nectar and pollen, but they consist almost from sugar, so a very economical feeding is certainly advised. I have a few larvae pulled out and fed the rest emigrated to the honeycomb in the freezer. Soon the larvae are removed and the beeswax comes back to beekeepers.

Frozen Food:
- Black mosquito (eaten by the catfish and bass, Bufis grab only terribly great hunger thereafter)
- Smelts (currently 2-3cm, more are frozen until broken)
- Gammarus (supplement)
and for a change
- Dried water fleas (eat only the Synodontis)
- Mussel meat (supplement)
- When and where there fish for bipeds, get the Ctenopoma also a small piece from
- Mysis (is a very passable food size, both for Bufis and for catfish)
- Drone larvae

There's no real food plan, but is mostly fed with mixtures. If there are living white Muelas, I give another rarely feed them. White Muelas be only shortly before the light fed emanates that the catfish gotten something.
Stand 04/2012, several frost-feed mixes have shown:
- Black Muela + Gammarus
- Black Muela + smelts
- Black Muela + mussel + smelts
- Black Muela + cricket + Gammarus
If there are Gammarus, I admit rather not stint or mussel to do so because there is a clear rejection here. Favorite frozen foods for Ctenopoma is obviously Gammaru and cricket or cricket. Since April 2012, I try out also Mysis (gefr.), Due to the size of small crawlers they are also recommended as food for the fish Busch. Mysis there instead or as a supplement to the black Muelas.
On days when there is little or no black Muela, there are dried daphnia for the catfish. Either I sprinkle the. On the surface, or I leave them to soak briefly in the glass and then they cant with a hefty slosh between the Anubias An ascent then they remain under the leaves, the root or stuck to my overhang of the rear wall and can be grazed by the Synodontis night.

Black Mosquito (Frost)
On the first day everything was fine, the Ctenopoma have snapped and keep one or the other moving larva. The Synodontis be lured just by this completely out of hiding.
Stand 05, 2011: the most popular food, not only for the catfish.
Stand 02. 2012: If only eaten by the Busch fish when there are no major chunk more or they are very hungry.
Stand 06/2013: are there only as a supplement when there are red Muela's, among whites hunt them actively among the roots. By red Muela's the catfish are not lured forth.

Enchytraeen (live)
The Ctenopoma have carefully snapped at them after they have cost each of them, they ignore it. The catfish seem not seem to be enthusiastic about them, there is still some worms wriggle in their sandy holes (2nd day)
But it will likely be fed no more. After 3 months, tried again, really do not like the little animals, no longer come to the bill of fare.

Red Mosquito (live and Frost)
If not sooo often fed, but if there are any, all go like crazy on it.
Stand 02 2012: frozen food is sometimes evening lined with frozen black mosquito, thaw first, rinse and then off to the pool. For Bufis there now and live red jumbos, which tastes quite well.
Stand 06/2013: Live red Muela's lure the catfish not clear, but there is then always gfrorene Black. The perch find the Reds extremely tasty, if this (living) fall mainly gradually one by one from the waterweed down.

Mussel meat (Frost)
on 24.05.11 fed first, the Bufis eat it only once a little appetite, but that should be soon. The black Muelas were at the beginning not great shakes. Rester will do the Synodontis.
Stand 04/2012: mussel there is rarely
Stand 06/2013: completely removed from the feed list

Live fish (guppy, moderlieschen)
When they eventually come into view, they are tackled downright greedy when the Ctenopoma can drive them into a corner, they are also eaten. But they very quickly lose the desire, when the living food will preserve their lives by fleeing.
Stand 05/2011: adolescent black mollies and mainly male guppy, Guppyweibchen (only the cultivated forms of the FuFi Aquarium) - they are hunted, but usually manage to escape. And at night then a bus and pick you up. I believe ...
(The big eyes of Busch fish characterize this as a night fighter from)

Stand 07, 2011: the Guppyzucht flourishing thanks to the surviving Black Muelas magnificently, now can still move some teenage Guppy who Bufis then have a few hours hunting experience. At 10:07:11 a pond owner to know that in addition to some "strange" fish (koi) small [...]