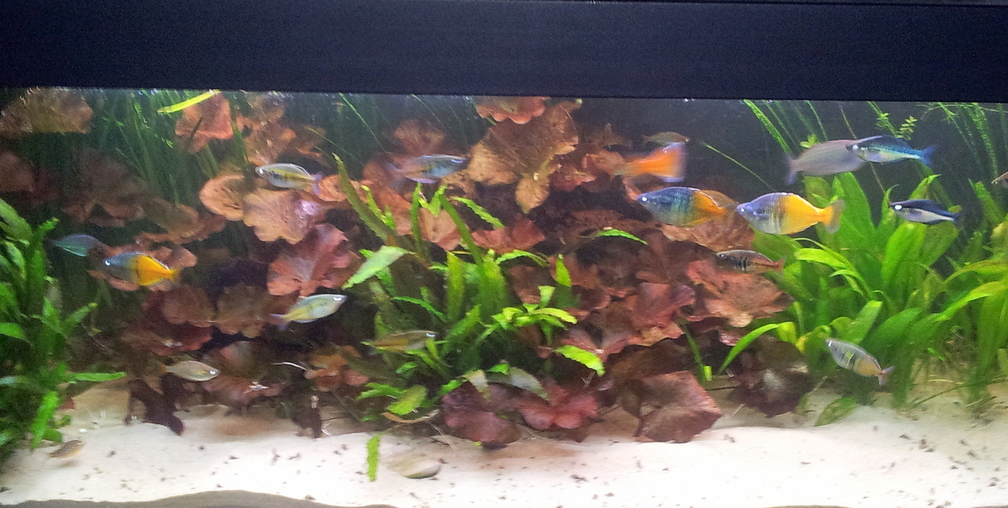 Description of the aquarium:
Category:
Community tanks
Tank size:
150 x 50 x 50 = 375 liters ~ 99 gallons (us)
Specific features:
* Classic rectangular aquarium with stabilized Wooden sideboard as a cabinet.
* As backplane I simply placed black-gray crepe paper behind the Aquarium and pinched a few artificial plants between glass and paper. Have characterized a good depth effect achieved. The Valisnerien in the background go great with it.

Stocking:
The rainbow fish (Melanotaeniidae (Gr. Melan, -anos = black + Lat. Taenia = strip)) are a family of mostly small lasting, often colorful freshwater fish that are endemic to Australia and New Guinea, as well as some of the offshore islands.

* 10 Ajamaru / Boesmans Regenbogenfisch
(Melanotaenia boesemani, Allen & Cross, 1980)
-The Harlequin Rainbow fish comes on a karst plain in the center of Vogelkop Peninsula in West Papua in clear waters. He lives locally limited in the Ajamaru Lakes and surrounding tributaries and in Aytinjo Lake, which drain into the Kais River. The color pattern of adult male Harlequin rainbow fish is very different from the other rainbow fish: head and front part of the body are bluish, while the fins and the rear half of the body are colored bright orange. At the junction of the two color zones are alternating light and dark vertical stripes. Females often have a greenish tinge and a wide, dark stripes along the midsection, which is flanked by thin orange vertical stripes between each scale row, especially in the posterior half of the body. Adult females are similar in coloring often half-grown, subordinated males, but are more slender and have rounded fin tips. The males have a higher physique and reach a body length of about twelve centimeters, the females stay somewhat smaller. With good posture, they can reach an age of over 8 years and has a length of about 15 cm.

* 13 Diamond Rainbow Fish / Neon Rainbow Fish
(Melanotaenia praecox) (Weber & de Beaufort, 1922)
-The Diamond Rainbow Fish is in West Papua, New Guinea native to the Mamberamo River system, where he was first collected in 1910 by the Dutchman van Heurn toilet in a tributary. He lives in slow-moving and often tea-colored by rotting vegetation small jungle waters. The body of the diamond rainbow fish is neon blue with red dorsal, anal and caudal fins. The body length is 6, rarely up to 8 cm. The sexes are relatively easy to distinguish: The color of the slightly smaller females is paler and its Beflossung is usually yellowish-orange. Because of its color and its small size for rainbow fish, the dwarf rainbowfish for aquarium maintenance is particularly suitable. Live specimens were taken in the early 1990s by an aquarist in the USA and from adventurous Heiko Bleher to Europe and are now bred commercially worldwide.

Pelvicachromis is a genus of small cichlids (dwarf cichlids) in West and Central Africa.
The genus was originally erected as a subgenus of Pelmatochromis 1968 but raised to the rank of an independent genre. There are about seven known species, most of which are held as ornamental fish. Their natural habitats are static and slow moving, clear waters.

* 1 Königscichlide / purple splendor perch / Wine Red splendor perch
(Pelvicachromis pulcher (Boulenger, 1901) (remaining animals from previous inventory)
-The Purple splendor perch (Pelvicachromis pulcher, Syn. Pelmatochromis pulcher), also Königschichlide, is a cichlid from western Africa.
He is the type species of Pelvicachromis and a popular aquarium fish probably the most famous representative of this genre. The copies now commercially available come mainly from offspring. The purple splendor perch is to breed relatively undemanding and easily in the aquarium. The socialization of several couples is possible because of intraspecific aggression in very large aquariums. Hiding places are necessary for the welfare of the animals. In particular, old aquarium strains are relatively tolerant of water conditions, which differ from those of the original habitat.