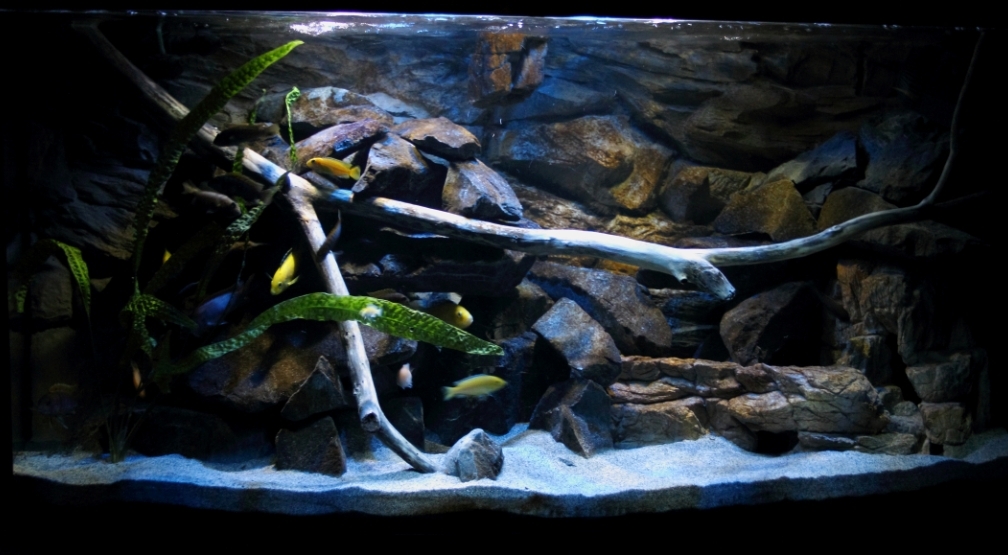 Special features of the facility:
3-D rear wall Rocky Stone hinterschwimmbar, so much volume of water is obtained

Whereby the small modules was glued to the glass center strut and thus projects into the pool from above.

An approximately 110 cm long dry Buchenast goes from top left into the pool clean and stretches all the way to the right!

Stocking:
3/8 Labidochromis sp. Hongi
Habitat
Labidochromis sp. "Hongi" lives in the rock as well as in the transition zone - wherever he finds Felseinbuchtungen, crevices and caves.
However, the species has a clearly recognizable preference for shallow and sediment-rich habitats.
The males are territorial and strictly keep on getting in, or nearer their Revieres (columns / Caves), while the females and juvenile bucks often attract and feed in groups through the habitat.

Nutrition
L. sp. "Hongi" is not a typical nursery eaters.
While the territorial goats graze in the immediate vicinity of their breeding coalfield, looking for females and non-territorial bucks usually in loose groups or often also individually from the entire biotope. It is interesting that this type always one and the same body must assess the substrate, which actually suggests rather an insect as a nursery-eaters.
Examinations of stomach contents have however proved that the animals eat not only the nursery, but also living in micro-organisms (invertebrates).

Behavior
In contrast to most other Labidochromis species, the L. sp. "Hongi"
intraspecific also be quite ugly.
Goats have absolutely no effort to prevail against larger more aggressive species. The females are remarkably shy and hide at the slightest sign of danger immediately in the smallest gaps and cracks. Territorial males are mostly with the defense of your brood coalfield (column, small cave) or engaged in the grazing of Aufwuchs nearby.
Once a female swims in the appropriate breeding ground, it is angebalzt immediately.
Spawned is exclusively in the described gaps or cavities.


1/4 Labidochromis caeruleus
Habitat
Labidochromis caeruleus lives in the sediment rich deep rock zone on both sides of the northern half of Malawi. He wanders because the species is not territorial and accordingly no grounds defended constantly searching for food by the biotope. A single population has been detected in shallow water, where it lives mainly in Valisnerien fields and worm hunts.

Nutrition
The genus Labidochromis among the insectivores and thus the carnivorous cichlids of Lake Malawi, which she. An exception in the large group of Mbunas darstellen.L caeruleus seeks its prey in the sediment of its biotope, in the nursery on the rocks and with fondness on the ceilings of large caves.
A single population of this species appears to be nutritionally haben.Sie differently developed lives in shallow water mainly in Valisnerien fields and eats snails, which live in these beds.
Nevertheless, this Mbuna needs some high-fiber and carotene-containing food (fe. Spirulina), which is why the Caeruleus also like hermacht times over the nursery.

Behavior
Like most species of the genus Labidochromis lives L. caeruleus rather solitary and is absolutely not territorial.Sie wander constantly through their habitat and never stay long in one place. Interestingly, they are tolerated by most other species in their districts.
There is a great fondness for large dark caves whose ceilings werden.Wie searched meticulously for possible prey for all non-territorial species, the females are angebalzt immediately encounter by the males. The mating ritual takes place in their habitat directly above the sandy-muddy sediment.

The type described belongs to the limnivoren cichlids of Lake Malawi.
It feeds from the nursery, respectively. diatoms (diatoms) and micro-organisms which they picked from the nursery out. Females and non-territorial males are busy almost all day looking for food.

Water change weekly about 50% and then treated with JBL Aquadur
Feeding:
Tropical Malawi with crude protein: 40%

2-3 times a week there are cucumber, peppers or zucchini

Live food Artemia 2 times per month
Further information:
Bin a long time aquarists but this is my first Malawi basin!

Have a nice day to all!