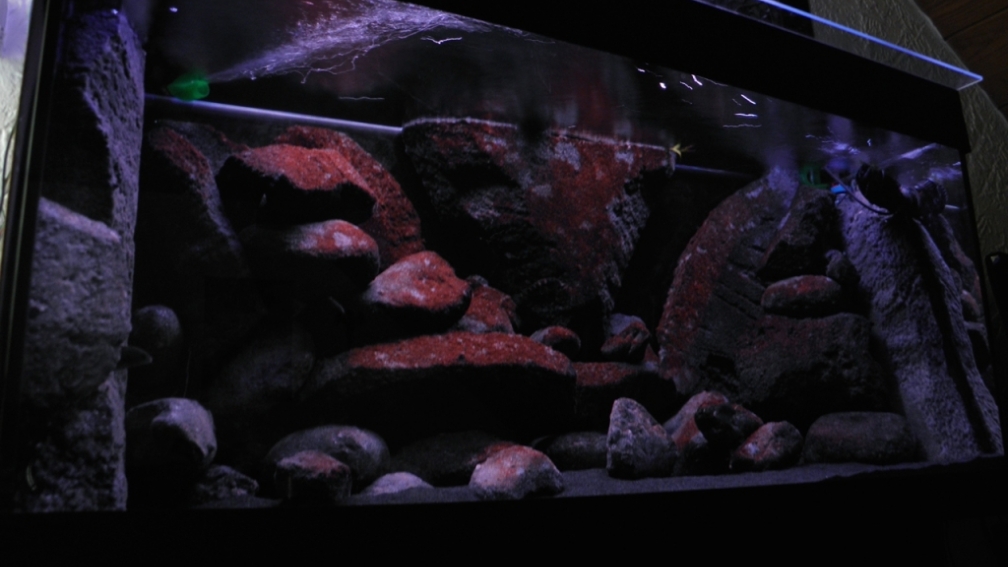 This pool is a gem rio 180th
It has been the cover, the illumination and the Eckinnenfilter removed.
The fill height was increased.

Aquarium decoration:
Gravel:
15 kg black sand 0.5-1mm
4x2 mm plexiglass to protect the disc
(3 below and a large above)

The sand was able to make only good experiences of Aqua Hausdülmen erstanden.Habe until now and will remain in the future at this ground.
Plants:
Diatoms !!!
a small Javafarn rung for testing purposes in a backplane module.
Diatoms are often regarded as a pest.
I think in a Malawi Aquarium these algae are absolutely in.
It supports the natural behavior of the fish and get incidentally a very natural aquarium.

The stone structures consist of elements which consist of artificial 3/4 Schalensteine ​​in combination with semi-precious stones, thus I have additional caves / crevices and hiding places.
The whole dan saves quite a bit of weight on the bottom disc.

This basin was influenced by many examples of the interior, is certainly one or the other a member find out its basin here:
there would be:
-hohle rear wall elements
-black stones
-black sand
flow ratio
-and many many little things more

Aquarium equipment:
Lighting:
selbstprogramierter daylight simulator with 2x90cm RGB waterproof strip (dimmed)
The strips have 30 Led's per running meter and were adhered to a 4cm thick aluminum profile which is 3cm above the Plexiglas cover.

My conclusion is that I can recommend this combination in the basin size very
Be the Beck Start run both filters by permanent.

When two external filters the bottom chamber was (which were equipped with small schwazren plastic corrugated tube) equipped with mini Spiorax.
Other equipment:
1xHYDOR - Koralia Nano

The first and only flow pump on a small scale (only 6 cm long!) For mini- and Nanoriffaquarien

Thanks to the included, exclusive magnetic suction cup, for up to 10 mm aquarium glass, and the special ball joint, the flow pump is easy to attach and adjust the direction of flow freely.

Labidochromis sp. "Pearly" lives endemic to the sediment-rich deep rocky zone region between the Higga Reef and Chuwa on the northeast coast of Lake Malawi. He travels constantly searching for food by the biotope.


Water depth of the nacre habitats

The habitats of L. sp. "Pearly" is approximately 25 to 35 meters deep, with the greatest population density could be identified at a depth of about 30 meters.

Most species of the genus Labidochromis belong to the insectivores and thus the carnivorous cichlids of Lake Malawi, with which they constitute an exception in the large group of Mbunas. The nacre seeks its prey in the sediment of its biotope, in the nursery on the rocks and with fondness on the ceilings of large caves. Nevertheless, this Mbuna needs some high-fiber and carotene-containing food (fe. Spirulina), which is why he also likes hermacht times over the nursery.

It is still not yet known with certainty whether Labidochromis sp. "Pearly" actually represents a separate species, or if they could not be merely a variant of the well-known Caeruleus. As the mother-population but is in the area of ​​distribution of the "Yellows" middle, but is probably more likely to go out of a separate type.

As most species of the genus Labidochromis lives L. sp. "Pearly rather solitary and is completely non-territorial. Wildlife are constantly moving through their habitat and never stay long in one place. Interestingly, they are tolerated by most other species in their districts. There is a great fondness for large dark caves whose ceilings are screened meticulously after possible prey. As with all non-territorial species, the females are angebalzt immediately encounter by the males. The mating ritual takes place in their habitat directly above the sandy-muddy sediment.

The nacre lives absolutely endemic and could be spotted only at three, nearby locations:


Attitude in the aquarium

Steep rock barrier with some large caves in between and a sandy, criss-crossed by individual large stones ground - for keeping in the aquarium a replica of the mentioned sedimentary rock rich biotope is recommended. Through the non-territorial behavior of Yellows no great attention must be paid to privacy.

Labidochromis sp. "Pearly" can already be kept in tanks from 200 liters. As perfectly the attitude of small groups (3m / 7w) would designate. The species can also in harems (min. 1m / 3w) are maintained. As described, species of the genus Labidochromis live if, then only in very loose loose groups.

The Yellows are very peaceable Mbunas, which is why they can easily be associated with almost all peaceful cichlids. Would be recommended but definitely species that live in the deeper sediment rich Feslzone.

In the natural habitats of L. sp. "Pearly" the spectral colors blue and green are still strongly reflected. YELLOW is located at just over 15 meters of water already in the absorption phase, ORANGE starting at 10 meters and RED is already totally absorbed.
Optimal would be a light spectrum with dominant green and blue, yellow and attenuated as low as possible to any Orange shares .. [...]

The water values ​​I ermittel over Tröpfenchentests / Titrtration as strip tests are inaccurate and often reflect incorrect values.
The temperature in winter at 24-25 ° C and in summer at 25-26 ° C
and a thermostat is controlled by about.
When exceeding the adjusted maximum temperature is warned acoustically.
In the summertime the water exchange is increased.
Source: Furnishing suggestions / advice
The PH level (acidity) is located in Lake Malawi between 7.7 which can be regarded as a lower limit and 8.8 as the maximum value.

A pH in water of 8.0 is desirable to have sufficient buffer to down as an underlying.

The average temperature in the lake is between 20 ° and 27 ° C. Again, you should aim for an average to obtain through eg water changes are not too big temperature jumps. 25 ° - 26 ° C is regarded as optimal.

Lake Malawi is a very low-germ water and due to the huge amount of water a correspondingly large water change is required in the aquarium, to avoid possible accumulation of harmful substances fish and remove. We forgot but that it is Lake Malawi is a body of water with a particularly low bioburden. (Source Spreinat) There are, according to measurements of biologists just 10 microbes per milliliter at a distance of a few meters from the lake to prove. Quote: For comparison: 100 cells / ml are allowed in Germany in drinking water according to the Drinking Water Ordinance. End of quote)
Feeding:
Biogurke
organic paprika
Tetra Pro Vegetable
Zac Premium Spirulina Sticks
JBL NOVO RIFT
JBL Spirulina 40%
living white mosquito larvae
-1x Month:
living Cyclops or Artemia
, frozen clam meat
Premium Chichli Plant-S
Organix Veggie Flakes

I pay attention to varied feeding, it is fed at irregular times and always offered different food.
Meanwhile I feed up to 2 times a smaller amount and holding weekly times a Lent.
Videos:

Further information:
Actually I wanted to replace a variety of stones are located in the pelvis against new,
since these were one of the first I've tinkered with my father.
The advantage would have been that I completely on real stones (to complain) could have done without, and so even more caves have less weight.
and of course a beautiful surface.
However, just as the planning was Blazed it occurred to me the first diatoms on to settle began.
a completely new picture ... Algae I had previously can not yet see in this basin since the LED strip used had a fairly narrow spectrum.
It seems as if in RGB LEDs algae growth is possible.
To test I have from another aquarium a Javafarnzögling placed on a backplane module to see if there is something in my idea.
We'll see ... until now it still looks the same as before from: D

The RGB-V7 computer can programieren very easily.
first you go to the free mode (Part 13)
Now you have 22 steps you can show:
which you need but only 12th
this one is on hold depending 2h and you've got a timer.
now simply with red, green and yellow occupy the first 5 or 6 steps (such as one light that wants to have maintenance)
Now even a sunrise and sunset magic by / is given to the first step, the lighting on 1 for blue / green red, then hold on 1 / 8sekunde and change to 2 hours (or hald both on 1H / as you like it halt) then goes the sun in 2 hours slowly.
The sinking just the last illuminated step one has equipped with a Adicional change time and the subsequent step (unused) simply cut around the same time.
ready is the programmed RGB computer