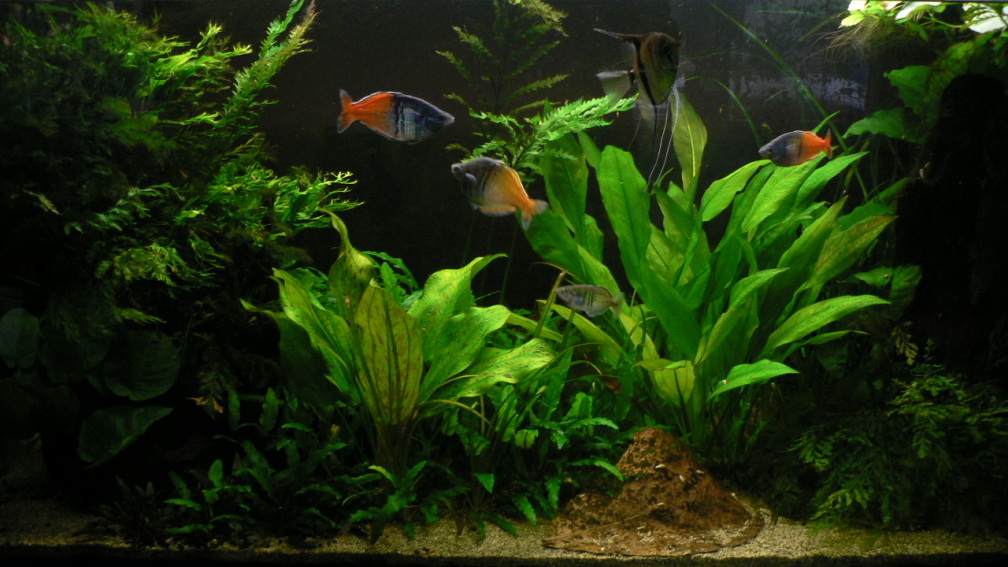 In 1985 began my interest in aquariums, then I began with a community aquarium (100x40x40) on. The first stocking were catfish, 15 and 15 Glowlight tetras. These then came a pair of scalar and a blowfish due always increased occurring worm. Next, they released guppies from my brother now.
One day I bought as probably every beginner a very unsuitable fish, it was a walking catfish (Clarias batrachus) he was then sold to me as a small permanent bottom dwellers (4cm size when buying with growth on allegedly 7-8cm will, these words never forget). This small catfish could well hide in the then well unkept pool. For this Wels still came a fire belly newt, which you could feed them with Tubifex. Over time, I wondered why my stock of guppies, and Glühlichtsalmlern Neonfischen became less and less. The fish disappeared again without a trace.
The puzzles were great until one evening the walking catfish with a size of about 20 cm saw well-fed. A few days later, I saw the otherwise very calm pig with an interesting hunting behavior by wagging his tail in front of the mouth and so attracted the tetras and then happened to lightning fast. What the rapid disappearance of fish was discovered very quickly.
The two hunters granted me very quickly empty the aquarium, which I then also the remaining animals gave to friends.
The pool was nobody, so I considered myself something new and made me Rotwangenschildkröten of which now inhabited rebuilt the pelvis. This I held up to my military service in 1990, then I gave the pool completely.

In 2008, I began after a long break back with a pool of Nano, this is still relevant. This I occupied with Red Fire shrimp around me reinzufinden back into the hobby.
After the pool was very good and I rediscovered the love of hunting, I began again with an Amazon basin in Schwarzenbruck near Nuremberg, perfect water conditions that pool was very good.

Moving to Fürth, the water values ​​changed which made to create the fish fairly, also came a Termometer what the wrong temperature indicated. Thus worst water conditions. Unfortunately, I was looking initially for all diseases, since the fish died from a variety of reasons and are approx every 2 weeks a.

For two weeks I have but now stable values ​​and have increased the basin again.

Update, have the summer of 2011 broke up with the Colombians and have bought myself rainbow fish. Since these are much easier to handle and have a greater life expectancy as the inbred Colombians. Become the reinschreiben days more on the current status.

Outline of the basin, certainly it is difficult to build up a pool as a room divider, so is my idea of ​​two large roots groups consisting of three roots. Which are positioned at the edges.
Meaning it is in which they can retire with the planting roots to create two relaxation rooms for the fish. The groups of plants should therefore take from the edges of the aquarium slowly and leave in the middle of a swimming area, where the fish can move freely.


JBL ProFlora u403 CO2 system with control unit and pH electrode;
- The system is designed completely ready and designed for aquariums from 50 to 400 liters.
- With JBL Ferropol (liquid fertilizer) and JBL Ferropol 24 (daily fertilizer).
- With pH control instrument (JBL pH-Control), which automatically regulates CO2 supply and adjusts to the pH level selected (incl calibration solution but without pH electrode.!).

-15- Hyphessobrycon columbianus, very nice fish, but unfortunately very voracious, so hard to keep up in society because he suffers through the over breeding of a fatty liver. So ideal for a species tank in soft water.

-22- Hyphessobrycon megalopterus, beautiful schooling fish, pleasant fellow, beautiful courtship, best stick together with calm fish. The Colombians were too wild for them.

-10- Poecilia wingei can be a nuisance, but absolutely rewarding fish for an Amazon basin, again any time;


-05- Anentome Helena, super worm hunters only one has at the end only carnivorous snails, so if using only an ode rzwei.

Water parameters:
Control measurements since now runs everything again, once a week.

After buying the CO 2 system with JBL and JBL Ferropol Ferropol 24 (4 drops daily).
Previously with DRAK Kramer Drak Universal fertilizers and additives of ELOS phase. 1 and 2