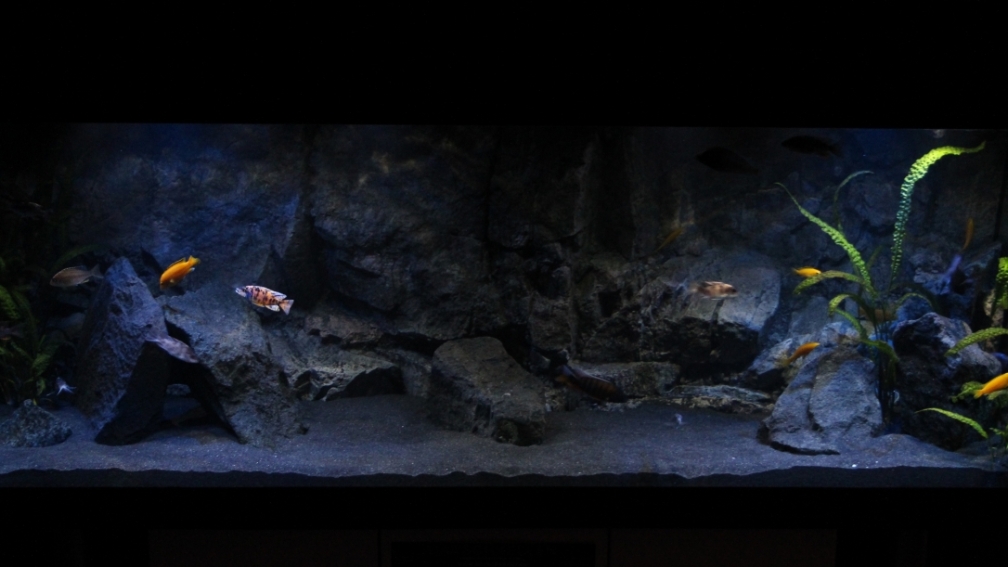 Description of the aquarium:
Category:
Lake Malawi
Tank size:
160x60x60 = 576 liters ~ 152 gallons (us)
Specific features:
The aquarium was made by the company ATD Friedeberg.

Rock: Basalt approx 40kg
In addition, are also behind the rear wall small basalt stones (ca.10kg)
Plants:
Cryptocoryne aponogetifolia
It is quite easy to hold and multiplies through foothills.
The leaves show a beautiful structure and are currently about 1-3cm wide and 10-60cm long.
Grows up to now also very good with Led lighting!

Special features of the facility:
Back: Rockzolid Kisar

Rock replica in gray, black and a bit green / yellow
Depth: between 0.5cm and 15cm

To install the rear wall, the central web was to be able to use this removed in one piece.
The hole for the Filterausströmer was manufactured with a hole saw.
The back wall I have seen on the left side about 0.5cm cut so that it fits into the pool properly,
this work and the opening for durschwimmen (a 10cm large adapted to the structural hole) I have carried out with a 360 ° hacksaw,
so that the fish can use the space behind it fully.
After installing the middle bar was naturally reinstated.

This is located behind the rear wall, in order to prevent
that, too much dirt accumulates on the side on which the filter suction is not sitting.

The risk of hybridization with two Aulonocara species is known to me, but as I do not want to breed
this should not be a problem.
Remains to be seen how the aggressions of Aulonocara distribute goats,
currently it funktionierrt very good, should it start, a kind must probably move to my other basins.

The Aulonocara Eureka is a selective breeding from Aulonocara jacobfreibergi Otter Point.

habitat
Aulonocara jacobfreibergi among the cave-dwelling Aulonocaras.
He peopled basically two different zones: The southern populations and the Mamalela variant on Undu Reef live in the transition zone, whereas the rest of the northern populations of sediment-rich rocky zone give priority.
But both variants is a strong reference to recognize caves, again a clear differentiation between the Übergangszone- and the rock zone Jacobfreibergis be seen.
The populations in the rock zones prefer large caves, which are also easily shared among multiple blocks, whereas keep those from the transition zone .Rather to smaller columns and this sharen reluctant.
Water depth of jacobfreibergi habitats
All Aulonocara jacobfreibergi populations can be observed in water depths 5-15 meters.

Nutrition
The type described here is one of the carnivorous cichlids.
About the aulonocara-typical sense pits on the head locates A. jacobreibergi invertebrates and crustacean in the sediment, which are then captured by a targeted kick in the sand.
Note: Amazingly, the meaning of the pits jacobfreibergi complex are slightly smaller than those of most other Aulonocaras. The logical assumption that the predominantly living in dark caves species have rather more of these institutions must, in order to better "hear" in darkness can, therefore is not a fact. To assume, therefore, that it is more of in the Jacobfreibergis a Urart the genus Aulonocara, from which the other, better-equipped types have derived in the course of evolution.

behavior
Sexual maturity males defend their cave areas regardless of breeding season, which, occupy nearly straight in the populations of the rock zone which inhabit large caves and several bucks together such a cave.
Interestingly, the most popular areas are always close to the cave ceiling, columns or just below it. The females cavort usually at the entrance of such caves and looking in the sandy bottom for food. Only very rarely can be observed on an open sand A. jacobfreibergi.
During the mating the females are lured from the goats in the areas where it is then also spawned - there is no evidence that the males build a special spawning ground, as do so many other ways.

Attitude in the aquarium
For the attitude in the aquarium to replicate a highly structured transition zone with many rocks and caves spacious as possible is recommended in the background. Nevertheless, it must be on free stretches of sand, which are searched in typical Aulonocara-way for food.
The species can be kept in tanks from at least 300 liters.
By unimpressive intraspecific aggression and the fact that several bucks together inhabit a single cavity, a group housing (3m / 6-7w) is highly recommended.
Naturally, the Harem entertainment (1m / 2-3W) is easily possible.

Depending on availability, live food
Further information:
I tried the aquarium set up so that there is a lot of free swimming space for the fish.
Left and right in the aquarium there are small stone constructions, planted with Cryptocoryne aponogetifolia.
These serve as a little privacy for the fish.
Hiding and withdrawal options are plentiful behind the rear wall, there are over the entire length of the aquarium constantly distributed small stone constructions.

Until now the Besatzt harmonizes very well with the establishment, no major aggressions!

A few Rockzolid Stone modules are planned for the future, which should be pasted as overhangs into the aquarium.

For tips and Kretík I am forever grateful !!