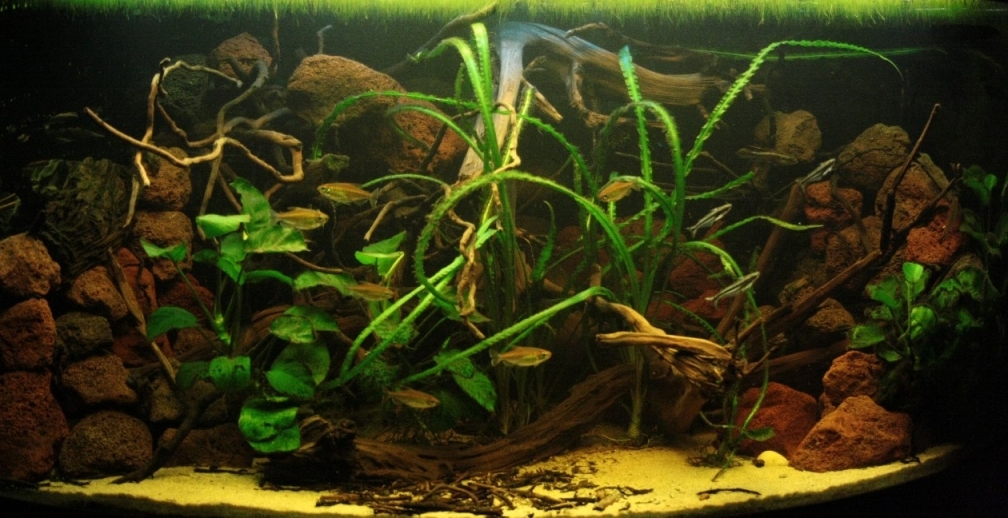 
Rising Sun (sunrise and sunset simulation and moonlight in green)

Shift During Central European Summer Time the indicated times by one hour ... !!!

It is composed of natural tannins, organic active ingredients and humic acids from peat together.
The liquid peat converts the normally crystal clear water into a brownish tropical waters.

Water parameters:
The water values ​​are measured weekly with test strips from JBL:

Primarily, the states are meant which are Sub-Saharan - ranging from Senegal, next to Nigeria, the Central African Anreinerstaaten of Cameroon to the catchment area of ​​the Congo River, the guests with its underwater aquarium owners for generations.
, Commonly all States should be counted in any case all States that are still on the coast, the west lie of Chad. Last but not least, the Republic of Congo to the west of the famous Lake Tanganyika added! On the contrary to the great lakes of East Africa, which of course are incurred, there are in western Africa rarely such.

Large rivers like the Congo or Volta are mostly not for the abundance of species and habitats of perch known as not the waters of the steppes and savannas. In general, most types focus on the Central African regions as well as the collection of the Congo. North of it decreases the number of species and the south, from about the so-called collection of Cunence Rivers (Angola), the species abundance is low.

Really big lakes - if any - have been mostly artificially created (eg, the Lake Volta.). There are several smaller natural lakes, which have a certain meaning (Lac May in the Republic of Congo or the crater lakes in Cameroon). Especially these smaller lakes have been intensively researched and examined.

The majority of West and Central African waters, from where come the most important for hunting and also known species leads, clearly very soft water.
Conductivities than 200 s / cm or 7 to 8 dGH are extremely rare, being most frequently values ​​between 50 and 100 .mu.s encountered. Only in very few exceptions, hard water is found. An example: The surrounding area of ​​the small Lake Bosumtwe in Ghana !! But Such a saline water is really the exception and should also be considered that way.

The biggest parts of the cichlid species that are known, at least from the literature are probably to be found in the areas of river systems near the coast to about 400 km inland.
The climate and the related circumstances are thus understandably different.

The northern side of the equator, from Senegal to northern Cameroon'm out, is characterized by about November to March dry period.
The further you go north, the drier the air. The south (from the southern part of Cameroon), this drying time is shorter and less pronounced. The same is true for the equatorial region and immediately south of the Equator.

From Sierra Leone to Senegal to recognize the impact of these severe drought in that very many rivers and streams in these months extremely strong to lose water and shrink by volume. Mostly dry this even under extreme conditions completely out, the more this is true in the savannahs and steppes to. That's one of the reasons why the biodiversity of the perch there is particularly limited (just also very different than in forest areas where dehydration occurs not as extreme).

It's actually quite logical that there, the closer you get to the equator, are also more rainfall per year, and then also arise even in smaller streams year-round water channels. Added to that comes here also increase the African forests, which is reflected as succinctly in species richness.

Another aspect are the temperatures of the water: Notable differences between the northern and equatorial region are here obese because be in the north, average temperatures from 25 degrees upward while even temperatures of 34 degrees in Senegal and Sierra Leone in Savannah rivers are not uncommon. But here are partly under these conditions Chichlidae encountered.
Most values ​​near the equator are between 19-24 degrees, so [...]