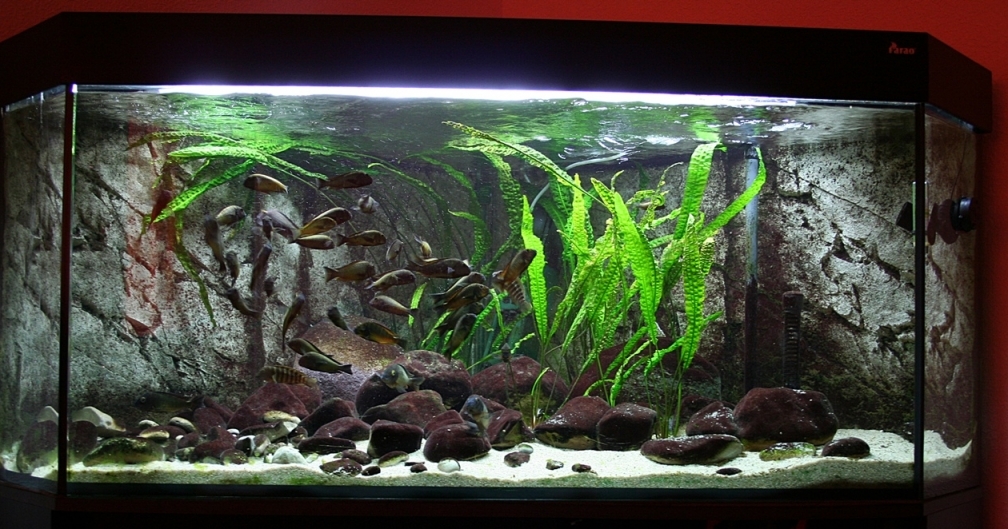 UV-burner in the bypass with the Eheim 2228

The home of Tropheus is the Tanganijkasee. This freshwater lake is one of the largest freshwater lakes on the planet. It is located within the large grave breach in East Africa, it is the largest ever in this complex. With more than 670 km in length, a maximum width of 80 km and a maximum depth of 1470 meters, this lake is surrounded by several countries - Congo, Burundi, Tanzania (main component) and Zambia. Only the Lake Baikal in Siberia is even deeper, with an age of 25 million years ago with 1642 meters. The Tanganijkasee other hand, is at least 12 million years old. Scientists argue today about its age, some claim he was "only" 12 million years old, while others think he was even 40 million years old.


The main habitat of Tropheus is Felslitoral, mainly the shore near Felslitoral. Here is an adequate nutrition is secured. Because of the low water level there flourishes grew up very well, so that even small fish find enough food here. Tropheus are found already in knee-high water, there, the sediments are grazed. Need in the lake
the nursery eater larger boulders. To feel safe, are often square-large boulders with greater substrate surface
prefers. There are many great nursery eaters are tired. It was
observed several times, the larger groups in combination of these
Formations truly descend to this graze. Usually take Tropheus, depending on their size, appropriate stones in fog.
Juveniles are satisfied with smaller stones, while eating
adolescent and adult animals sometimes football-sized with about
Stones are satisfied. These stones are then defended fiercely.

Thus it can be observed in their size Felslitoral a permanent migration of the animals.

My organization is based on there occurring cliffs, the BTN backplane may give the impression that it is here at a rock wall
concerns. This Streilküsten often reached after a few meters already considerable depths. Of course, it is not possible for the aquarium
bring such large stones into the pool.

I chose river pebbles in different sizes, these were then distributed almost at random in the basin. These mostly round river pebbles jeopardize these fast swimmers in any way. Only the rear part was provided with larger stones, provided as a screen.

Meanwhile all the pebbles are strongly overgrown with nursery,
This so-called. shag rug is the very natural diet
contrary. It is regularly gezupt it and my little troupe
makes itself ever more than a stone's really her. The diet
the Tropheus should greatest attention. These
Animals do not have a sense of satiety, as for example in fish eaters
is available from Lake Malawi. Tropheus have a special bowel,
which almost exclusively for digestion of plant
Kost is designed. This issue is addressed separately in my blog, which also contains a lot of information about these animals.

Between all these stones come naturally for many
other fish species, are often found there, the so-called. Tanganyika clowns,
the genus Grundelbuntbarsche. These animals scurrying among the rocks
round and because of their nutritional requirements, the ideal co-inhabitants
for Tropheus. The Grundelbundbarschen is also to
highly specialized nursery eaters, they are often of the Tropheus
not perceived.

The front area was messed up with smaller and larger pebbles
diced occupied. Here was especially paid attention that emerge any areas or caves or shelters
can. These so-called. Shelters or caves might of dominant animals
be used as an attack center to attack from there younger or inferior animals, ie an animal sitting in this area,
Meanwhile, [...]