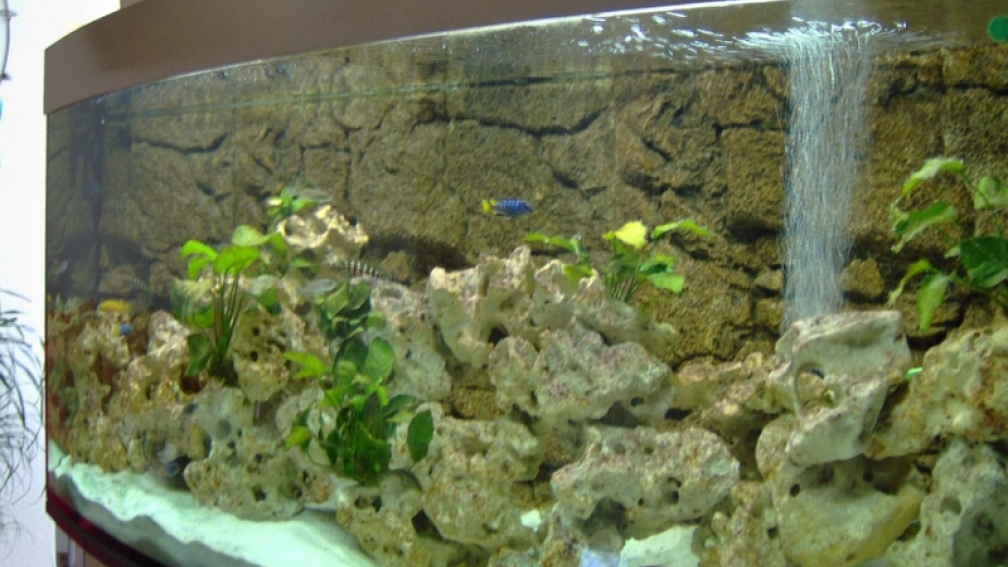 Description of the aquarium:
Category:
Mixed East Africa tanks
Tank size:
150 x 50 x 60 = 450 liters ~ 118 gallons (us)
Specific features:
The 08/15 design in beech light was adjusted by means of reaction of free colors of Other equipment. Furthermore, the entire construct was 30cm admitted for reasons of space in the wall.

Aquarium decoration:
Gravel:
The decision was made after long pondering on ca 40kg pretty bright river sand. Since this seems to be, however, be detrimental to the natural behavior of the inhabitants, is probably added in the near future darker Bodengrung.
Plants:
To avoid having to regularly honor the Zoohändler my confidence because "natürlichme browsing", I have decided on a few hartblättrige Vetreter the genus Anubias. And indeed, these seem to sein.Schön completely uninterssant for planting interested Mbunas :-)
Special features of the facility:
Following the current mainstream and I opted for ca 70 kg Indonesian holestone, and did so several large and small caves, shelters and hiding places puzzled together ... If these stones also have a significant weight advantage over his home rubble, so my decision was nevertheless of my personal taste worn.

Aquarium equipment:
Lighting:
To come as close as possible to natural Bedinungen, the basin is "enlightened" of 2x36W (T8) Dennerle African Lake :-)
Filtration:
The heart of the whole forms an Eheim Professional II 2128 Thermo Filter 1050 l / h. However, because this does not seem to be "front and back" enough (large Kotansammlungen under the suction / outflow unit) to this will soon add join a powerful internal filter.
No sooner said than done: a 1000l / h Fluval internal filter is a subject!
Other equipment:
To prevent clogging of the soil and this at the same time use it as a biofilter I run next to the thermal filter nor a 25W-floor heating as Bodenfluter.

The grades 1 and 2 are fed in an irregular change 1x per day, live food or frozen food, depending on the offer once a week. In addition, I offer irregularly on lettuce leaves and green cucumber, which also find well received.
Further information:
Remarkably, the two most dominant fish in the pool, namely the Cyprichromis- and Sciaenochromismännchen have destroyed their "harem" within a few weeks. Both species were used as the 1/5 groups. With never-before-seen hardness hunted and killed the males jeoch their conspecifics, despite adequate hiding places and proven status as females ... They seemed easy to get over this loss and employed themselves "higher" tasks. Ever since the two are widowed, they formed a Agressions control instance in the pool. So fighting fish are separated, territorial boundaries, assigned and monitored a hierarchy. Sozialpsyhologie in fish ... Beautiful!