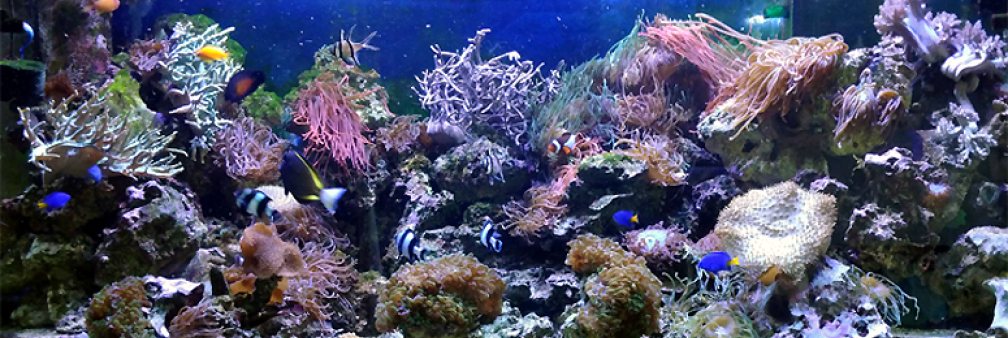 Hole in the bottom plate for connecting an external filter Eheim 2224
Filter is cleaned every three months.

Special features of the facility:
Member of device examples are 2005

The new saltwater aquarium has dimensions of 150 x 70 x 70
The relocation of the old into the new aquarium took about 8 weeks.

Here are some details of the move:

1. There were about 200 ltr. fresh water aquariums recognized.
2. Two one-meter aquarium were asked yet ready.
3. These pools were set up to half with Altwasser
4. invertebrates, reef rock, fish were distributed implemented in two basins,
the pools were filled as needed with freshly prepared seawater.
5. The new aquarium was set up and with fresh water up to half
filled, a part of the old ground was the same as taken.
The aquarium thus remained filtration, lighting and heating three weeks
normal operating stand.

Device with holestone and with tuffs.
An attempt was so good it was possible to recreate a Rifflandschaft, the
Fish are therefore commanded caves and hiding places.
In order to ensure sufficient circulation, the bodies of two were
large sandstone slabs made. The sandstone slabs lie on 4 cm high
small Styrofoam panels. With a (Hydor 5200 Koralin flow pump) to the
lower portion of Riffaufbaues be easily traversed.

7. After another fortnight the reef rock was with invertebrates into new
Basin implemented. The overhangs was completed. The missing water
was filled by backwater.
8 had to wait another fortnight until the new Aquarium Fish
could be implemented.
9. After this relocation plan, everything went well and without losses on the stage.
On 20/08/2013 I have my new saltwater aquarium at the
Device examples presented.
Aquarium equipment:
Lighting:
eSmart Sea Nemo Light 4216 W / 150 cm
Seawater, programmable
Filtration:
1 Powerhead 1400 ltr. Std. Schnellfiterung
1 Powerhead 1400 ltr. Std. Schnellfiterung