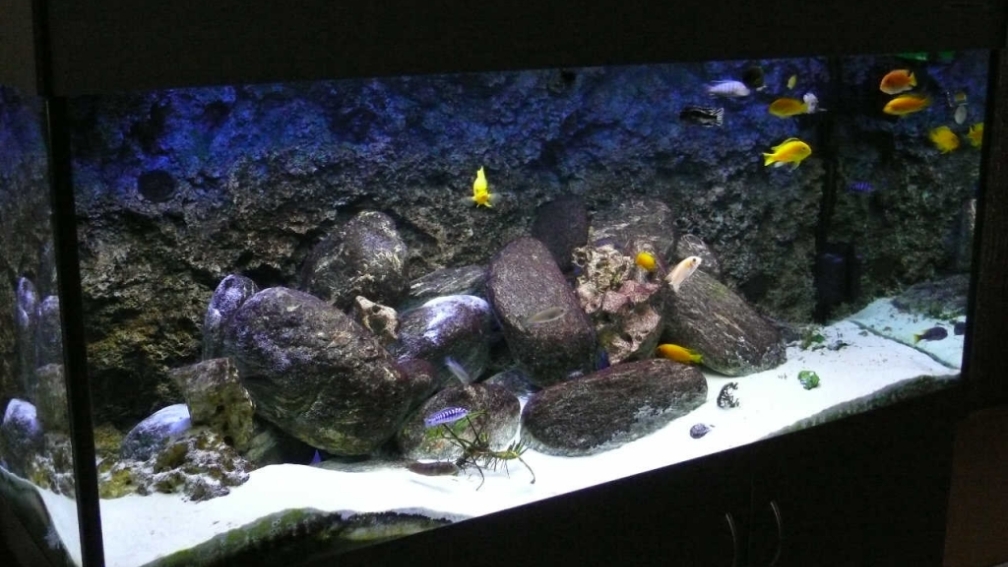 Description of the aquarium:
Category:
Lake Malawi
Tank size:
140x60x60 = 504 liters ~ 133 gallons (us)
Specific features:
Special production of Amazonas Aquarium in Reutlingen. Coverage of Seaqualux aluminum. Basin is in 12mm glass and Stossverklebt with seams and center bar. Windscreen made of white glass. Cabinet is made by a carpenter in silver, with ABS edges and gravel cover.

Approximately 100Kg Anatolia Green stones
Plants:
Only Anubias Nana
Special features of the facility:
3D back wall of Stone Age Design from Austria. Stones Anatolia Green in a round shape. This I have preferred a natural as possible underwater landscape of Lake Malawi to replicate. The stones were placed on a plate 4mm thick Plexiglas and then poured the sand.
Aquarium equipment:
Lighting:
Lightbar from Seaqualux (Domilux), 2 flames in T5 - 54W, individually dimmable. And a spot for Simu Mondlich, sunset and storm simulation. Gesteurt is anything from a GHL Profilux aquarium computer.

This is all to juveniles.

Measured before the water change:

Water change weekly 50%
Feeding:
- Nature Food Premium Cichlid Plant
- Nature Food PremiumColor
- Tropical Malawi
- Tetra Rubin
- Frozen foods: white and black mosquito larvae
- Cucumbers
- JBL Spirulina
Further information:
The pool has been running since April 2009. At first were less rocks in the basin, the new stones can be seen on the images very easily recognize as no algae it is. Until recently, was my other non-stocking in Malawi basin. This has now been issued and now the Mbunas in it. Currently there are 25 fish in the tank. These are young fish from a hobby breeder.
* * 23.11.2009: In the meantime, the new stones are overgrown with algae and sit down not from the rest. I play with the idea still bring something darker rock hole to create something more hiding places for young. Also, I'll try the existing stones to rebuild something for something more "height". On the whole, the AQ has successfully developing well and retracted. I especially like the colors that arise with the programmed lighting. At night when the lighting at dusk is very into the blue, gives the impression of Lake Malawi in 7-10m depth. Nice to see the new photos.

** Update: early 2010: pool cover was leaking, cabinet is swollen. Complete emptying of the basin and cabinet exchange. Now new composition of stones (current pictures which follow). Runs like a one, a lot of offspring. Through the hole rock survive many of the little ones. Interesting color combos!